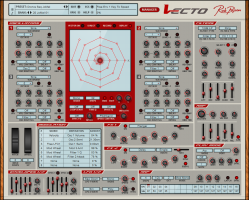 Rob Papen has released Vecto, a four oscillator Vector Synth plugin for macOS and Windows in VST, AU and AAX plug-in formats (Vecto was originally created for the Propellerhead Reason RE platform).

Vecto is a four-oscillator vector synthesizer that allows users to draw in vector paths to shape the sound in many different ways. It includes a large range of oscillator waves, plus sampled waveforms and lots of different modulation options and preset vector paths to help create the unique Vecto sound.

Due to the interesting range of waveforms, from classic analog models, Additive, Spectrum and high quality sampled waveforms, the sound options are deep. Two filters have been added to the 28 filter types and 2 effect processors finish the audio route off.

Find Vecto in the KVR Marketplace