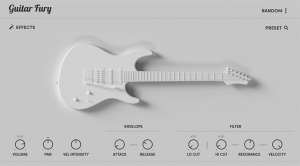 Sample Logic has announced the release of Guitar Fury, an extensive 43 GB collection of nearly 600 multi-sampled guitars and guitar-inspired instrument presets for the full version of Kontakt.

This is cinematic diversity at its finest, featuring multi-sampled performances captured by guitar impresario Steve Ouimette and programmed by the Sample Logic team.

Think you know guitar libraries? Think again. Guitar Fury is no traditional multi-sampled guitar library. It goes far beyond with every preset meticulously produced and dressed in glorious creative effects, resulting in a cinematic sound that blurs the line between music and sound design. From this massive virtual instrument arises a straight to the point user driven musical tool designed with a fresh and modern easy-to-use interface.

I bought Guitar Fury at the introductory price based on the promo video and audio clips. However, I have been unable to use the instrument on my Windows 10 PC running the full version of Kontakt (6.2.2). I followed the installation instructions, used the FAQs on the Sample Logic website, watched the installation video, and contacted tech support. The NKI file loads but I have to manually point it to the Samples folder every time. It also says "no snapshot loaded" and there are no presets. I'm pretty sure I have the folders in the wrong place, but I followed the instructions and advice of tech support and still no dice. Does anyone have Guitar Fury fully-functional on a Windows 10 platform?

Yes, I figured that out and now I don't get the missing samples warning. I also discovered that the presets need to be in C:\Users\<myusername>\OneDrive\Documents\Native Instruments\Kontakt because I use OneDrive to backup my documents. Neither solution was offered by the vendor.