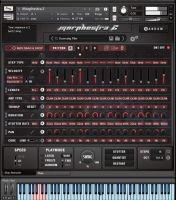 Sample Logic has announced that Morphestra 2 has been relaunched for the full version of Kontakt at a much reduced price over the previous Kontakt Player version, and with an extra $210 discount introductory offer.

Morphestra 2 contains over 3,500+ morphed cinematic instruments and multis derived entirely from true orchestral recordings. With Morphestra 2, you can dynamically change preset attributes on the fly, making it easy to sculpt and design your own sound.