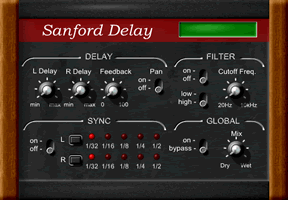 Version 2.0 was actually released a couple of weeks ago, featuring a completely new GUI.

Version 2.1 added MIDI Learn. This works by right-clicking over the control; a pop-up menu will appear that lets you choose either "MIDI Learn" or "MIDI Forget". Clicking outside of the menu will cancel the operation. After clicking MIDI Learn, the plug-in will associate the next controller message it receives with the specified control.

Version 2.6 improves the MIDI Learn feature and corrects a couple of bugs. MIDI Learn data is now saved with the bank data. Also, when you click on the title, "Sanford Delay," a popup menu appears that lets you make choices such as displaying the About Box, canceling MIDI Learn (if it's in progress), and clearing all MIDI Learn data from the bank.

There was a bug in v2.1 in which the headers weren't saved to the Bank/Program files. This is now fixed but files saved with v2.1 won't work with v2.6.