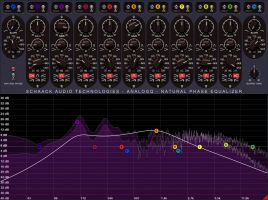 AnalogQ allows you to equalize your material the analog way. While most available equalizer plugins suffer from having problems near Nyquist (half sample rate), such as distortion of the EQ shapes, AnalogQ is capable of generating an analog-like frequency response up to Nyquist while even allowing EQ center frequencies up to 30kHz, all without oversampling. The additional Natural Phase mode generates a near-analog magnitude/phase response at the expense of very low (0.75ms) latency.

How does this compare to other Manley Passive emulations?