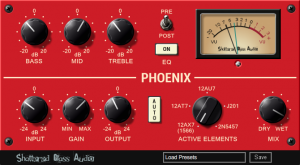 A new efficient circuit simulator delivers 10-20 times improvement in performance over its predecessor while reducing the noise floor below -130dbFS. In addition to the original circuit from SGA1566 MkII, Phoenix simulates an additional four preamp circuits (two with tubes and two with transistors) with the same two-stage topology. EQ, now, has mids control as well.