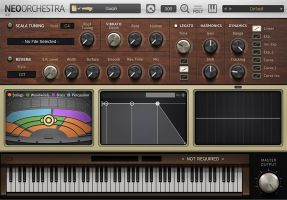 Guqin is a plucked seven-string Chinese musical instrument. It has been played since ancient times, and has traditionally been favoured by scholars and literati as an instrument of great subtlety and refinement, as highlighted by the quote "a gentleman does not part with his qin or se without good reason, "as well as being associated with the ancient Chinese philosopher Confucius. It is sometimes referred to by the Chinese as "the father of Chinese music" or "the instrument of the sages".

The guqin is not to be confused with the guzheng, another Chinese long zither also without frets, but with moveable bridges under each string.

Find Guqin in the KVR Marketplace

What's New @ KVR Audio
Plugins News Deals Reviews
Latest Plugin Deals & Offers
THEPHONOLOOP updates Tapes.01 to v1.5 - 25% off until end of SeptemberUeberschall Load > Play > Loop Sale - Up To 80% OffUVI offers 40% off Meteor through September 27th, 2021Sounds And Effects "Drums And Percussion of Ancient Mexico" SaleSynchro Arts launches up to 33% off all VocAlign plug-ins sale including new Project 5Black Octopus Sound Hip-Hop & Trap sale until October 3rd - 50% off on samples and presetsAudentity Records Deal: €10,00 Off Every Sample PackMeldaProduction offers 50% Off MBassador, MDrumEnhancer, MWaveFolderMB and MFreqShifterMBKrotos Sale: Save 30% on Sound Design Bundles and Sound Effects LibrariesSonic Academy announces 65% off ANA 2 until the 30th of September, 2021See All #KVRDealsSee All KVR Marketplace Deals