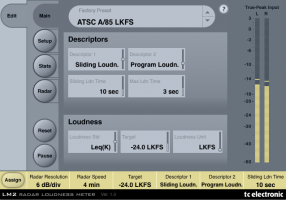 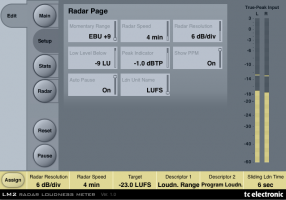 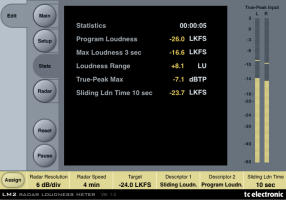 The new LM2 plug-in features TC's innovative Radar Display that provides a quick – yet detailed – overview of the loudness landscape of any stereo audio signal. The main radar view shows loudness history, while the outer ring displays momentary short-term loudness. Finally, True-peak Levels are shown in real-time on the right side of the user interface, completing the overview.

Further, there are two versatile descriptors that can be set to reflect a variety of parameters – e.g. Loudness Range (LRA) and Program Loudness. Each revolution of the radar can be set from 1 minute to 24 hours, which means that LM2 will in fact log loudness data for up to 24 hours continuously.

Plug-in Formats
The LM2 plug-in supports all major plug-in formats, including AAX, RTAS and Audio Suite for Pro Tools as well as AU and VST. These five formats virtually cover all DAWs imaginable and also most digital video editors on Mac or PC. Naturally, it is perfect for monitoring real-time audio signals, but it is also capable of performing off-line measuring in Pro Tools as an Audio Suite plug-in. Used this way, loudness measuring can be done much faster than in real-time – with only the CPU of the host computer setting the limit of off-line measurement speed.

LM2 Hardware
As well as being sold separately, the LM2 plug-in will be bundled with TC's LM2 19" rack-mountable hardware loudness meter, offering the best of the hardware and software worlds in one package.

A Small Family
In March 2012, TC launched the LM6 Radar Loudness Meter plug-in. On top of the LM2 features, LM6 provides support for 5.1 surround and includes a log file feature that allows the plug-in to create a text-based log-file stored on the users hard drive or network.

Broadcast Standards
In recent years, loudness has become a major topic in broadcast. Many countries are now passing legislature on loudness in broadcast due to listener complaints about annoying loudness jumps between channels, programs and commercials. Therefore, it has become paramount for broadcasters to comply with recent standards and legislation. As a consequence, anyone delivering program material for broadcast should be aware that their content may be subject to loudness correction or even rejection if it is not compliant with the standard that the station they are delivering for have decided to follow. LM2 is compliant with all of the major broadcast standards, including ITU BS.1770-2, EBU R128 (Europe), ATSC A/85 (US), TR-B32 (Japan), OP59 (Australia) and more.