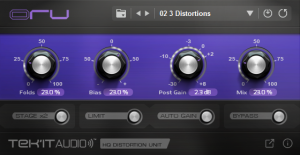 Tek'it Audio has announced the release of a new HQ Distortion Unit, Oru, a wavefolder distortion plug-in for VST2, VST3 and Audio Unit plug-in formats for Windows and Mac.

The interface features a "Mix" control for blending the original sound with the sound of Oru, an "Output Gain" control with auto-gain to keep your level under control and a limiter stage to drive your distortion even further.

A trial version of Oru is available to download as a VST2/VST3/AU plug-in for macOS and Windows.

Find Oru in the KVR Marketplace