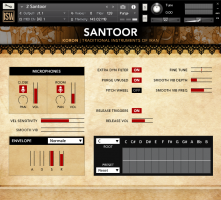 Koron was developed as a collaboration between Impact Soundworks and producer Siavash Mozaffari, who traveled to Iran to record all the instruments in their native land.

Impact Soundworks recorded as many key playing techniques as possible: simple sustain articulations, short notes, and ornaments, to legato and glissando playing, and dozens of drum strokes. All instruments include multiple dynamic layers, round robins, and (where possible) samples across multiple strings.