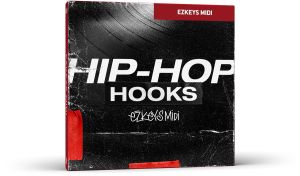 Toontrack has released the Hip-Hop Hooks EZkeys MIDI pack, a new MIDI expansion for EZkeys inspired by a broad range of hip-hop styles.

Although hip-hop has undergone numerous shifts and sorted a massive amount of splintered subsets under its umbrella, one thing is certain, regardless of whichever style a track may be attributed to: the hook is central. In fact, the proper hook is the heart and soul of not only the beat, but also around which an entire track can pivot. This is exactly where this EZkeys MIDI pack shines. Inspired by a broad repertoire of classic-to-modern hip-hop, it focuses on delivering a wealth of the critical building blocks you can use as hooks.

Each "song" is organized in an "A" and a "B" part where the former is the main hook and the latter a breakdown of sorts. Of course, each section includes several variations of each, ensuring that you can mix, match and seamlessly fuse blocks to come up with your own flow throughout a track.

If you are on the look for some new beat ingredients to base your songs around, this is the ultimate virtual chemistry set you need to get going. Welcome to your new hip-hop playbook.