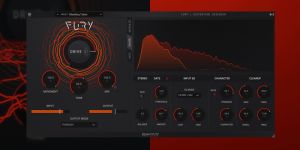 Heavyocity Media has announced the release of Fury Distortion Designer, an all-new distortion plugin. Here's what they say:

Offering an expansive range of distortion modules in one plugin — from subtle tube warmth to hard clipping, lo-fi crush to analog-modeled circuitry, simple to downright chaotic — Fury is a distortion playground. An effect plugin designed to be fun and intuitive, but also sonically flexible.

At its core, Fury is a semi-modular distortion designer. The main part of the distortion effect has three distinct sections — Drive, Distortion, and Tone — within each of these sections there are several modules allowing you to mix and match, altering the behavior of each, as you see fit. There are over 700 possible module combinations and over 100 custom-made presets for you to explore. The LFO, Envelope Follower, and Sequencer can add subtle movement, reactivity, or create harmonic complexity, allowing you to shape, mangle, or crunch your sound.

There has been use of distortion for as long as there has been audio recording, and its styles and sounds have evolved with technology over time. With Fury, we've built a cohesive plugin that not only brings those various qualities of distortion right to your fingertips but also allows for creativity, maximum customization, and complete audio mayhem.

Heavyocity is also offering a free, time-limited demo of Fury — in demo mode users will be restricted to 15 minutes of audio processing time and no offline exports will be available.

Doesn't scan plugins or let you know where it hangs. Useless.