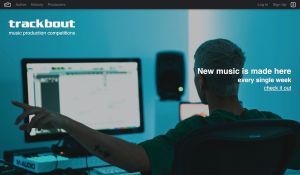 There will be one competition each week, so that all of the attention for the entire platform will be focused on a single group of producers. Every Thursday, a chord progression will be posted as a source of inspiration, marking the beginning of that week's competition. Producers will have until the following Tuesday to submit a 90 second track that contains some or all of the chords that were posted.

Once the entry window closes, there will be a preliminary stage of voting to determine the tracks that will advance to the finals. At this point, all of the tracks that have been entered are publicly available for anyone to listen to and vote on at trackbout.com. There will then be a livestream hosted directly on trackbout.com every Thursday, during which a host will play back the finalist's tracks, the finalists will be invited to join the livestream to discuss their track if they are available, and the final round of voting will occur to determine the winners. More details can be found here.

Making these competitions as international as possible was a high priority for the team, so a livestream time of 10am in Los Angeles was chosen to be as friendly as possible, to as many of the timezones that currently represent the bulk of Trackbout's website traffic as possible.

Trackbout will partner with different companies in the pro audio space each week to sponsor these competitions, by providing music production related software or hardware as prizes. Los Angeles based software developer Baby Audio will be the initial, launch week sponsor, providing several of their plugins as prizes.

Finally, in order to help producers earn extra income, Trackbout has partnered with Stripe, Inc. through their Stripe Connect platform. By completing the optional Stripe Connect onboarding, producers can receive payments, which can be thought of as tips, directly from music fans who want to show support for the producers on trackbout.com and their music, in the dozens of countries around the world where Stripe is available.

Find Spaced Out and Super VHS in the KVR Marketplace