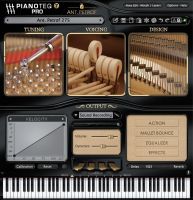 Modartt has announced the release of PETROF 284 Mistral concert grand piano for Pianoteq, which has been updated to v7.3.0.

This physically modelled virtual instrument is authorized by PETROF and reproduces the exquisite sound signature suitable for demanding concert performances.

PETROF 284 Mistral Concert Grand Piano is the PETROF company masterpiece. Measuring 2.84 m in length, it is their largest piano, and is loved for its tremendous bass and resonant treble. Artists find in it a trusty companion when performing the most demanding works. It also possesses the soft, romantic tone that is so characteristic of all PETROF grand pianos.

The physically modelled virtual reproduction of the original instrument benefits the latest innovation by Modartt, introduced in Pianoteq 7: the Double Polarization — modelling string vibrations that can take any direction, allowing more complex and longer tones to be reproduced. This new modelling implementation is particularly useful for emphasizing the bass range of the PETROF 284 Mistral.

And of course, PETROF 284 Mistral can be used for creating new sounds by using the other Pianoteq 7 innovations: Morphing, letting you create new hybrid instruments with acoustic authenticity, and Layering, letting you mix several instruments or split them across the keyboard range.

This physically modelled virtual instrument for Pianoteq 7 is authorized by PETROF, spol. s r.o. It was carefully evaluated and fine tuned with the help of an experienced team of talented musicians and two of PETROF's best voicers and tuners. It captures the characteristic PETROF sound with a range of presets offering a beautiful palette of timbres suitable for all kinds of music.

The PETROF 284 Mistral accompanies the ANT. PETROF 275 in the PETROF instrument pack (49 €/$59). The instrument is available for evaluation in the latest update 7.3 of Pianoteq and in the free trial version.