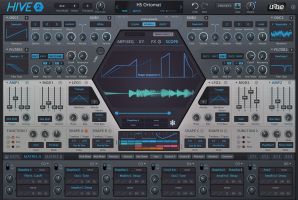 u-he has released Hive 2.0 which comes with a new interface, more modulation options, NKS support and much more.

At the heart of the Hive 2.0 upgrade are the new modulators: An 8-segment Shape Sequencer adds 4 sources for evolving modulations, per-voice envelopes, rhythms and gates. The basic shapes and levels, curvature and "ratchet" amounts can be individually edited. Surrounding the Shape Sequencer are two west-coast-style Function Generators which are triggered by the keyboard gate, Shape Sequencer, LFO or any other modulation source. Although they are basically AD-envelopes, the function generators can also be used as extra LFOs or lag generators. The new modulators complement Hive's existing envelopes, LFOs and sequencer – they were designed to match Hive's core strength: Ease of use fast workflow.

Updates to the Modulation Matrix include visual feedback for the recently introduced modifiers (e.g. Rectifier and Slew Limiter), chord- and scale-based quantization options and a new Sample & Hold. u-he also added a global scale-based quantizer to Hive's keyboard control which can also be used to modulate oscillator pitch in musical scales - a means to algorithmic composition, chiptune arpeggios and automated chord progression.

Hive 2.0 comes with 350 new presets to illustrate these new features, which include evolving pads, complex rhythms and complete one-note demos. Those presets can be found by clicking on the special "saved search" in the preset browser.

For owners of Hive 1.x: Hive 2.0 is fully backwards compatible and will replace Hive 1.x in the plug-in folder.

Price: The upgrade from Hive 1.x costs 20€. There's a grace period which started January 21st, 2019. The "u-he Hive 2 Upgrade PDF", which comes with the download, contains all the necessary instructions and links.