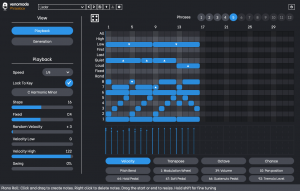 Venomode has updated Phrasebox to version 1.0.4, adding code signing to the Windows installer, and fixing bugs.

When you download and run the installer executable on Windows, you now won't be shown the orange warning message.

In addition, many bugs have been fixed that relate to the drag and drop feature added in version 1.0.3.

Price: £49. The update is free for existing users, and can be downloaded from the Venomode website.

Find Phrasebox in the KVR Marketplace