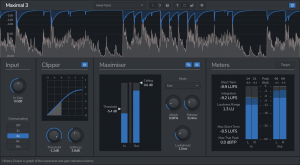 Venomode have announced the release of Maximal 3, a loudness maximiser plugin for Windows, MacOS, and Ubuntu computers, in VST, VST3, AAX and AU formats.

Maximal 3 has been rewritten from the ground up to offer enhanced controls and a cleaner sound compared to the previous version.

Maximal 3 is a free upgrade for existing Maximal owners - the new licence can be found in your Venomode user area.

Find Maximal 3 in the KVR Marketplace