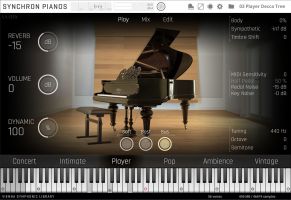 The Vienna Symphonic Library has announced the release of Blüthner 1895, a virtual representation of a beautifully refurbished 193 cm (6-foot-4) grand piano with patented Aliquot stringing. The vintage Blüthner's famous "golden tone" was captured at Stage B of Synchron Stage Vienna from eight microphone positions, with all the charm and peculiarities that give a seasoned instrument its character.

Lyrical Grand with a Singing Quality
The recorded grand piano was built in 1895 by the famous Julius Blüthner Pianofortefabrik of Leipzig. The instrument was acquired by Synchron Stage Vienna after having been lovingly restored by master piano builder Bernhard Balas from Vienna. The 6-foot-4 professional scale instrument is equipped with Blüthner's specially developed and patented Aliquot system that uses additional dampened strings positioned above the conventional strings of the treble register, which are not struck by the hammers but resonate sympathetically. This fourth set of strings enhances the overtones, providing a velvety, organic shimmer and giving the instrument a particularly lyrical "singing" quality. In addition, all of the strings are unusually long and thin, stretched to an enormous string tension of 20 tons, which helps define the instrument's specific sound. In combination with its soft hammers the Blüthner grand produces a clear, yet warm and soft timbre that is superior to many modern instruments in its variety of tonal colors.

High Precision Motion-Control Sampling System
Vienna's Blüthner 1895 grand piano was recorded at Stage B of Synchron Stage Vienna. This beautiful 69 m² (739 sq ft.) live room with a 3.5 to 4.5 m (11.5 – 14.75 ft) height features a controlled acoustic environment with less ambience than the large main hall (Stage A). To capture the instrument with all its subtleties, a highly precise motion-control system based on a solenoid controlled a noise-free "robot finger". This proprietary technology represents the pinnacle of Vienna's long-term sampling robotics development. The micro-controller moves the finger with super-human precision, providing flexible curvatures for down-strokes and release movements.

Customized User Interface
Blüthner 1895 comes with the proprietary Synchron Pianos player software that incorporates a powerful sample playback engine featuring streaming performance that guarantees glitch-free playback despite the high number of samples and microphone positions. Six character presets that cover a lot of genres ("Concert", "Intimate", "Player", "Pop", "Ambience", and "Vintage") can be accessed instantly from the main window. What's more, users have a multitude of options for creating their individual timbre by mixing various microphone signals, filtering particular key ranges or even single keys, adjusting the instrument's string and body resonances or adding a pinch of algorithmic reverb.

Introductory Offer
Like most other products of Vienna's Synchron Series, Blüthner 1895 is available in two versions:

Both versions are offered at special introductory prices through August 31, 2019: