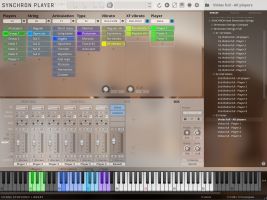 Variable Ensemble Size
The three Collections of SYNCHRON-ized Dimension Strings were recorded in homogeneous groups, capturing all of the human interactions and slight imperfections of a live performance. Using individual microphones for each player allows the user to access each voice of the ensemble individually. With the Vienna Synchron Player's clearly laid out structure of voices and articulations, it's easy to change the size of each string ensemble within one instance of Vienna's proprietary sample player – from the principal to single desks to the full ensemble size. Of course, the technique of individual miking is perfect for divisi writing, too. The integrated mixer with individual impulse responses assigned to each instrument provides the possibility to automate the volume of each musician of the ensemble.

Subtle Timbral Nuances
The SYNCHRON-ized Dimension Strings Collections include the full set of articulations, such as three different sustains (vibrato, non-vibrato and progressive vibrato), Repetition Performances (legato, portato, staccato, spiccato, various crescendos and "harsh" fortissimos), legato, portamento and trill performances, various tremolos (normal, slow, and with fast attack), pizzicato, snap pizzicato, col legno and more. Since each string of each instrument was captured in its full range, it's possible to change the timbre of an ensemble by selecting presets such as "force strings" or "use/avoid open strings".

"Con sordino" and "Sul tasto" Articulations
SYNCHRON-ized Dimension Strings II includes nearly the same articulations as SYNCHRON-ized Dimension Strings I. In this second installment, all string instruments were exclusively recorded "con sordino" (with mutes), resulting in a particularly silky smooth timbre that perfectly suits intimate arrangements and emotional ballads. The all-new SYNCHRON-ized Dimension Strings III collection is dedicated to the most subtle and delicate string sounds, created by playing "sul tasto". Placing the bow near the fingerboard results in a lack of (even) harmonics and in a very soft, breathy timbre, similar to that of a flute playing in pianissimo. The Synchron Player's ability to gradually increase the number of players opens all-new possibilities for starting arrangements "dal niente" (from nothing), or to fade out a note to little more than a bare whisper ("al niente").

Production-ready Sound
SYNCHRON-ized Dimension Strings I, II and III come with the Vienna Synchron Player. Vienna's software developers implemented a specifically designed convolution reverb derived from Vienna MIR Pro, featuring the unique ambience of the 540 m2 (5,813 sq.ft.) main hall of Synchron Stage Vienna. The included placement presets combine customized impulse responses with expertly crafted reverb settings for each individual player of the ensemble. By adding the ambience of Synchron Stage Vienna's Stage A to the relatively dry samples in real-time, all three SYNCHRON-ized Dimension Strings Collections perfectly blend with every other product of the Synchron Series.

Introductory Offers
The new SYNCHRON-ized Dimension Strings Collections are available at special Introductory Prices through April 30, 2019, starting at $330. Registered users of Vienna Dimension Strings I, II and III benefit from substantially reduced crossgrade prices when purchasing the corresponding SYNCHRON-ized versions. All other Vienna string libraries are available at major discounts during the month of April, 2019.