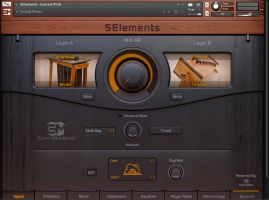 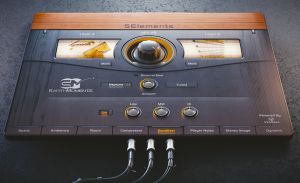 5Elements by EarthMoments is a Virtual Instrument Audio Plugin and a Standalone Application and Soundware (samples or presets that load into other products) for macOS and Windows. It includes, and is therefore "powered by", Kontakt Player, which functions as a VST Plugin, an Audio Units Plugin, a VST 3 Plugin, an AAX Plugin and a Standalone Application.
The OS and Format icons below are for the latest version of Kontakt Player. The version numbers are for 5Elements.
Product
Version
1.0
Product
Version
1.0
Tags
Tags:Ethnic Instruments5ElementsCustom InstrumentEarthMomentsEthnic MusicEthnic StringsKontaktKontakt InstrumentPercussionStringsWorld Music
Instrument
Formats
Soundware
For
Native Instruments Kontakt
Copy Protection
Serial Number
My KVR - Groups, Versions, & More
4 KVR members have added 5Elements to 2 My KVR groups 5 times.
Not In Your MY KVR Groups
(or group limitation prevents versioning)
4 0 I Want This
1 0 Favorites

5Elements is a selection of unique sampled instruments created for Kontakt and the free Kontakt Player. The 5Elements concept is inspired by the ancient Indian concept that all creation, including human existence, is made up of five essential elements: Earth, Water, Fire, Wind, and Space. Here's what they say:

In 5Elements, EarthMoments has captured the authentic character of eight original handmade instruments created by Aurelio C. Hammer at the Svaram workshop in Auroville, India. 5Elements adds features that enhance these distinctive instruments to create an immersive set of lively sounds, full of a wide range of frequencies and layers. It's perfect for sound design and scoring, adding a refreshing perspective to your projects. "What we are looking for in our instruments is capturing the atmosphere, the inherent harmonic structure of nature, because the aesthetics are right in nature," comments Hammer.

Each instrument includes several playing styles called "sub-instruments, such as strummed, plucked, struck with mallets or sticks, and pre-recorded phrases. You can layer and mix two layers of instruments or sub-instruments and can apply compression, EQ, and reverb.

5Elements also allows you to add a drone layer of binaural beats. A binaural beat is the frequency perceived by the brain when two different frequencies are listened to, one in each ear. The perceived frequency is the difference between the two frequencies. Research shows that certain frequencies are associated with specific brain activity. The use of binaural beats in 5Elements is influenced by the traditional drone sounds in classical Indian music. You also can add an ambience layer of field recordings and sounds of the beach, forest, village, workshop, and rain from various places in South India.