Altair 4 - The SciFi Sounds Lab by HG Fortune is a Virtual Instrument Audio Plugin. It functions as a VST Plugin. 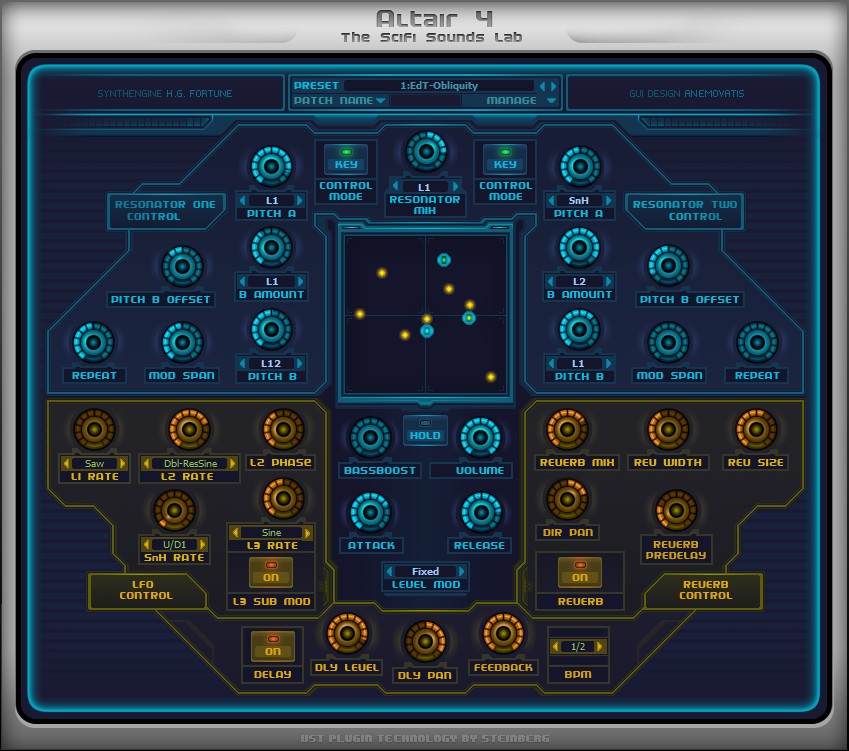 Altair 4 - The SciFi Sounds Lab is best suited for creating soundtracks for movies or games in the genres of SciFi, Suspense, Horror, Fantasy and similar, that need special, spacey, wobbly FX sounds. It can do more than these, e.g. bell-like stuff, and it even fits well in fairly conventional songs.

Altair 4 is also an homage to the movie 'Forbidden Planet' from 1956, it being the first movie with a complete electronic soundtrack using sounds that could have been done with this plug-in.

Forbidden Planet is one of my favorite science fiction movies and the soundtrack has been a big influence in my musical career. As soon as I saw 'Altair 4' in my RSS feed from KVR I downloaded the demo and then bought the pro version. For those who don't know - Altair 4 is the so-called 'Forbidden Planet' in the movie by that name (from 1956).

The VST is a SynthEdit design made by HG Fortune for Windows only. It is not a general purpose synth, in fact it is aptly named 'The SciFi Sounds Lab' because it specializes in making certain types of sounds - typically those associated with science fiction effects. Especially, the classic Sci-Fi from the 50's and 60's which featured signal generators and theremins and stuff like that.

The manual that comes with the VST is not very complete - there is no block diagram and the description of the controls is a bit weak, but it's enough to get you started.

There are two resonators that generate ring modulated and FM modulated effects - or at least they sound like this to me. The effects have a variety of modulators and controls, a synchronizable delay stage and a reverb stage. No filters and only an AR envelope - this is a very specialized tool.

I would have like a randomize feature because this design is well-suited to that type of exploration. I used the 'MiniHost' VST Host randomizing tool to make my first set of presets.

I think a phaser/flanger effect would also make a nice addition to the output stage, but you can always follow the VST with your own effects...

Typical types of sounds that you are likely to make with this are: bell, bleeps, arcade noises, sample and hold sequences, inharmonic timbres, experimental sounds,heavy LFO designs, and weird and strange things. You probably would not design a violin or a piano!

What synth do you actually USE the most in your own music????by folderol @ 8:04 in InstrumentsYour fave MIDI fx, arp, mapper, mangler, generator, chorder, controller, utility. VST or MFXby Kalamata Kid @ 7:58 in Effects

About doubling vocals by tracking them in stereoby Russell Grand @ 7:48 in Production Techniques