Analog Factory by Arturia is a Virtual Instrument Audio Plugin. It functions as a VST Plugin, an Audio Units Plugin and an RTAS Plugin. 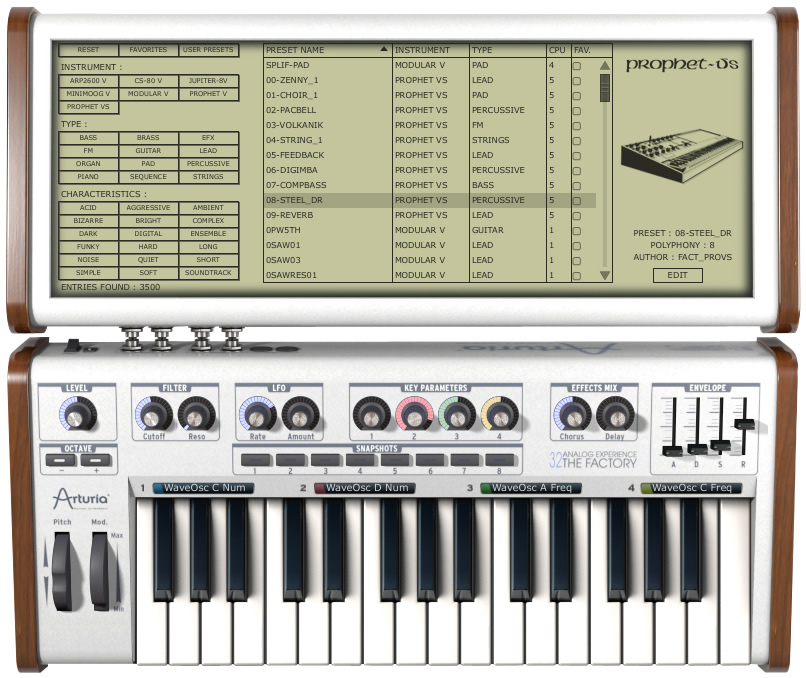 Analog Factory is a powerful, yet easy to use virtual instrument. Loaded with 3500 legendary sounds (instead of 2000 in the first version) carefully selected from the Arturia Classic Synths, Analog Factory provides the contemporary musician with a broad, versatile and instantly striking sonic palette. It is also a very versatile instrument: all sounds are dramatically modifiable, which makes this software stand apart from any sample-based collection of sounds.

The interface includes a smart Preset Manager that allows in just a few clicks to find desired sounds from within the huge preset collection. But Analog Factory is not only a collection of sounds. Since it is based on synthesis, all sounds are modifiable - a set of the most essential parameters provides the user with an efficient way to tweak and alter the sonic character of the sound.

Analog Factory has been developed with TAE, Arturia's proprietary technology for analog emulation.

Not sure if this is still supported by developer; the download link takes you to the top Download page at the Arturia website, and I don't see any information for Analog Factory.

I used it occasionally after installing "Analog Factory SE" which was a demo included on a (very old) issue of Music Tech or like magazine many years ago. If you can find that installer I can tell you it does still work as a VST on a Windows 7 system with recent (2018) versions of Reaper and Ableton Live.

It's funny that we on KVR worry about making things sound 'analog'. We try and instil programmed oscillator tuning drift, when all the time back then engineers and composers were trying every trick they knew to keep oscillators strictly in tune... We lament the passing of the transistor and the discrete electrical component, and yet the invention of the PIC - and later the microchip - revolutionised industrial [and musical] applications, making circuit boards more reliable and less costly than ever before...

But - you'd like to make some music which sounds very much as though it originated in wooden-sided behemoths, with chunky knobs and obscure acromnyms - VCO, VCA, VCF and other obscure reference to Voltage, envelopes, ladder filters. Using the technology of zeroes and ones to create music that sounds forty years old in its inception... I know I do! We have the remarkable benefit of virtual instruments. Firstly, they allow us to own the esoteric, the vintage - but without the huge pricetag these instruments commanded back when they listed new. Secondly, they allow us to integrate their output cleanly within our signal chain - no more messy recording techniques or makeshift, humming, non-filtered interfaces. All kept within the box, on the screen, with stereo and high-fidelity recording the mere click of a mouse away. Thirdly, they allow us to recall complex patches and modulations without the need to take polaroid photos, or drawing frantically on paper-sets. Patch change mid song? We can either click on 'next', or we can spend another virtual fortune instantly, and open up another instance right next door. Try doing that with a CS-80 or Moog Modular system!

Why this meander? Well, it's a brave claim to label anything so obviously virtual - a VSTi - with that hallowed term, "analog". We whisper it, alongside terms such as "vintage" and "classic" - and curse its misuse, criticising anything that dares to emulate historic instruments with anything less than perfection. Analog Factory is, for all its pretence, Arturia's equivalent of the Kore Player from Native Instruments. A closed system, whereby the synthesis engines from their emulation range – the CS80, the Minimoog, the Jupiter 8, the Prophet 5 and VS, the Moog Modular, and the ARP 2600 – classics all – have been made available but with their wings clipped, so you rely on the programming of others for your sounds. The interface seems rather unnecessary until you see the optional bundled hardware, which it mirrors in terms of controls and keybed range. Unless you’re stuck for MIDI control, you’ll likely have a more encompassing MIDI controller, but I understand Arturia’s ‘integrated design’ idea.

A preset player such as this lives or dies on the strength if its presets. With over 2500 sounds, there’s no shortage of quantity.

As with NI’s Kore, the patches are indexed both by synth model and by type; 'short’, ‘decaying’, ‘percussion’, ‘pad’ etc – so that searching through them isn’t the chore that it might otherwise be. There’s a large number of useful sounds here – although at first listen, Arturia’s TAE system offers a ‘plasticky’ tone, in fact this translates well into a final mix, and my impressions of some finished tunes was how genuine they sounded. On their own, some of these sounds are dry and uninspiring – but, as with much older hardware – come alive once inserted into a bus with an effects chain, or some reverb. My major criticism is that some of the ‘sequences’ sounds are fixed in note structure – unlike the Moog Modular V instrument, where an atonal element can be straightened to the correct key or scale, the sequences are fixed in note interval. If the sequence doesn’t fit, then it’s useless to you. The controls available to you are limited, but likely to be sufficient for playing. Filter cut/res, amp envelope and four preassigned macro controls might not seem like much, but it allows for quite a bit of movement in your sounds.

I’ve only played three of the classics listed above, so I’m in no position to advocate or test authenticity of all the sounds. However, I’m guessing that most of the owners of this instrument won’t have either, and for the majority of their needs it would pass muster. As a historical document then, it’s not perfect, but as a quick and dirty way of bringing history into your tracks, it succeeds well. Where it really works is in the best tradition of preset players – in its immediacy. As a musical scratchpad, as an instant source for ‘vintage’ and ‘analog’ sound ideas, it has little comparison at its pricepoint. A well set-up sampler with carefully prepared samplesets would offer the same, but would cost far more. Either way, it’s a grand way of getting sounds and ideas down on [virtual] paper.

Take it at face value and it’s a rewarding instrument, which does offer a variety of ‘analog’ flavours right out of the box. I was more impressed than I thought I’d be!Read more

I got here trying to find out if there is a 64-bit version. I suspect not. Too bad. I used it a little and would like to again.

Analog Factory has been replaced by Analog Lab which is 64-bit.