Aphex Vintage Aural Exciter by Waves is a Virtual Effect Audio Plugin. It functions as a VST Plugin, an Audio Units Plugin, a VST 3 Plugin, an RTAS Plugin and an AAX Plugin. 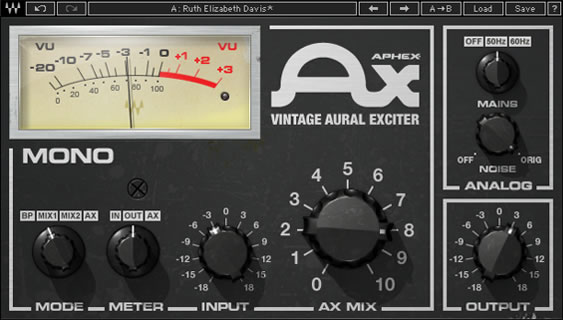 When it was originally introduced in the mid-1970s, the Aphex Aural Exciter brought its distinctive sound to select sessions by leading recording artists, traveling from studio to studio as an exclusive (and expensive) rental unit.

A true ground-breaker, the original Aural Exciter was highly regarded for its ability to increase and enhance presence, brightness, and vibrancy on vocal and instrumental tracks alike. It was even credited as a "session player" on best-selling albums by the likes of Jackson Browne, Linda Ronstadt and James Taylor, engineered by Val Garay, who worked closely with Waves on the development of the plug-in.

Modeled on one of only a few tube-powered units ever made, the Waves Aphex Vintage Aural Exciter plug-in delivers all the unique character of the rare original hardware unit, with all the advantages of software.

The Aphex Aural Exciter is really cool. It sounds real. It's got a real true and true analog noise sound. This particular VST is noisy and gritty on purpose. It makes your sounds have white noise and gritty noise making the tracks you put it on sound brighter. Contrary to what I understood when I purchased the Exciter is does NOT make it smooth sounding at all, but rather actually gritty. Gritty noise once again. Sorta really really gritty more like a loud badly mic'd cymbal but really consistant at the same time. Thought i'd help you understand what I learned. That being said, this Aural Exciter is really nice at low settings. Even at zero.

At zero this Aural Excited has little little little noise. Virtually unoticable or possible none at all. BUt it does make your track sound more analog. Really cool.

It's nice that Waves.com has sales often.

The Aural Exciter plugin from Waves comes (from "my ear view") very (!) close to the hardware unit. The aphex vintage aural exciter plugin is one i use in the most productions on one or two single instruments or on the master bus / during mastering.

Together with Waves Kramer Tape plugin (very cool on vocals) and iZotopes Trash2 (very flexible, but limited in some parts to get a "real hardware" units analog sound)it round's up my box of saturation / excitement effects.

Thanks. I'm wondering if they combined the "best of the best" so speak, of all the Auaral exciter's they've used that are true analog. I really appreciate your post and your expertise. IM not a master and I haven't attempted to apply the Aural excited by Waves in all the situations yet. For me i'm thinking about "trashing up" haha, so speak, a dubstep song sometime with the exciter.

Thanks for the input on the Kramer. I'd like to try it on vocals. Brilliant idea. Maybe I can get some shine. :) Peace bro (or sis).