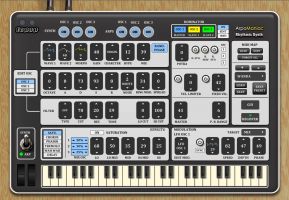 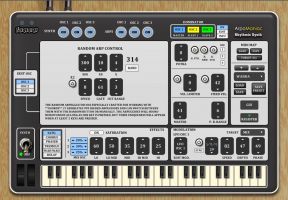 Whether you are warm analog sound addict or cold blood screamers fanatic, you'll probably love Arpomaniac's tone's philosophy. It can become anything you'd want. Be it screamy and roaring, you'll find your way to your favorite sound by using Arpomaniac's unique character engine which makes sound designing easy as a pie.

The special character feature is actually a short-cut which allows the sound designer to achieve many types of sounds and tones that need a complex programming in most easiest way. Only 3 knobs create everything from screaming to glassy, from picky to metallic. from sharpy to heavy and in combination with the oscillators, many interesting musical (and well, also non-musical) sounds can be explored. Off course, It's all up to the user to decide.

Arpomaniac's arp is an already programmed machine that shoots out 999 built-in arpeggios and shines when it comes to chords. it recognizes all kind of chords and follows it's notes perfectly. It can be set to any time signature and speed, synced to the DAW's BPM. It can also randomize one of it's 999 combinations during playing with the "random" knob, switch note lengths and speed and even play across few octaves.

The dominator utilizes the independence of the oscillators to create an internal hierarchy between them and by that, to let the user decide which oscillator will be the dominant (and a cross what frequency zone) and which will remain side-chained slaves. The hierarchy ducking effect is critical especially when running complex arpeggios.