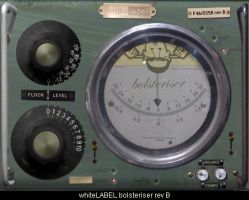 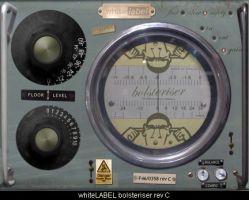 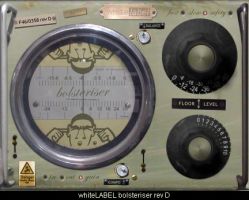 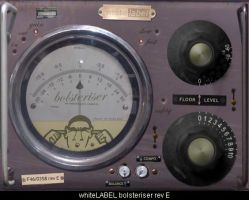 bolsterisers by whiteLABEL is a Virtual Effect Audio Plugin for Windows. It functions as a VST Plugin.
Product
Version
1.2
Tags
Tags:Dynamics (Compressor / Limiter)bolsteriserswhiteLABEL
Effect
Formats
Copy Protection
None
My KVR - Groups, Versions, & More
9 KVR members have added bolsterisers to 3 My KVR groups 9 times.
Not In Your MY KVR Groups
(or group limitation prevents versioning)
6 0 Favorites
2 0 I Own This
+1 in private groups

whiteLABEL's collection of bolsterisers are described as "naive dynamics" plug-ins.

The bolsterisers hark from a time before compression as we now know it. A long-obscure English experimentalist engineer and gentleman scientist by the name of Edwin Pierfax III derived his naive design of the original bolsteriser during a nap on the lawn with his cat Tiswold. He is said to have announced one day during afternoon-tea that he had "found a method to aid in the bolsterising of signals to an extent most satisfactory".

He set to work at once.

Fast-forward nearly ninety years and the bolsterisers are reborn in digital form. After various component-level tests, it was decided to power-up the devices and take some measurements with a view to recreating these fantasy beasts in software - and here they are in their equally naive digital implementations.

In their day, there was no working language of audio compression, so some of the terminology associated with the bolsterisers is a little out of keeping with the modern production lexicon. Today, the devices would be characterised roughly as follows: