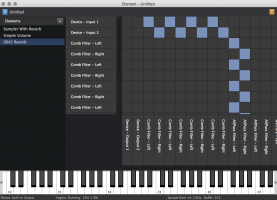 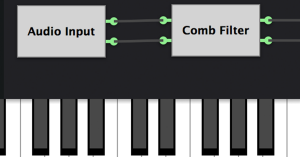 Element by Kushview is a Virtual Instrument and a Virtual Effect Audio Plugin and an Audio Plugin Host and a Standalone Application for macOS, Windows and Linux. It functions as a VST Plugin, an Audio Units Plugin, a VST 3 Plugin, an AAX Plugin, a LADSPA Plugin and a Standalone Application. It can host VST Plugins, Audio Units Plugins, VST 3 Plugins, LADSPA Plugins and LV2 Plugins.
Product
Version
0.46.0
System Requirements
Windows 7 or Higher
Product
Version
0.46.0
System Requirements
Mac OS X Catalina or higher
Product
Version
0.46.0
System Requirements
Mostly tested on Ubuntu, but should run on any modern distro.
Tags
Tags:Plug-in Chainer / RackAU WrapperAudio RouterelementkushviewModular EnvironmentModular FXRouterVST HostVST Wrapper
Instrument
Formats
Effect
Formats
Can Host
Instruments
Can Host
Effects
Other
Development Tool
Copy Protection
None
Open Source
GPL
My KVR - Groups, Versions, & More
101 KVR members have added Element to 10 My KVR groups 120 times.
Not In Your MY KVR Groups
(or group limitation prevents versioning)
66 0 Favorites
22 0 I Own This
19 0 I Want This
6 0 My Actual Studio
2 0 My Perfect Studio
+5 in private groups

Element is a modular AU/VST/VST3 audio plugin host for live performance and the studio. Chain plugins together into effects racks and instruments.

As an Effects Rack: Chain effect plugins in parallel or series. Route audio from anywhere to anywhere.

Runs in your DAW: Element is a standalone plugin host, but can also run as a plugin in your DAW. Open a new pipeline between you and your tools.

Want to report a bug or request a feature? See the Element issue tracker on Github.

Because Element runs on both Mac and PC, and all major plugin formats AU/VST/VST3.

Average user rating of 3.71 from 7 reviews
Read all reviews Add A Review

Element is exactly what I've been looking for. A host that I can use to combine and play plug-ins (VST, VST3 or AU) and optionally live sound, for playing live and experimenting without the overhead of a full-blown DAW.

I've used Audiobus on iOS and was using Minihost Modular from Image Line on macOS. Minihost Modular is 64-bit, but is getting long in the tooth; a number of plug-ins no longer load or work properly for me, and it seems to have been abandoned (last updated 2014).

Element looks like a great replacement for me. It has a number of nice features, including over 25 plug-ins that come within the package. Like Audiobus and Minihost Modular, it lets me wire together plug-ins and save sessions that preserve plug-in settings, preset choices, etc. for the next time I open them; almost like building custom instruments for live play.

I'm still learning to use the application, and there are some workflow and interface challenges, but so far I have been able to use it for live playing and have mapped a MIDI controller to the Element-supplied Wet/Dry control for dynamic control of effects.

I'm quite happy with it so far and will be investing more time in using it and providing feedback to the developers. I'm giving this a 4 star for now, as I haven't explored all features (or using it as a plug-in in a DAW), I've run into a few minor glitches and the workflow and user interface are a bit awkward at times. Also, the current 0.46.3 release (including the latest tag on GitHub) dates back to July 2021. There is some recent activity in GitHub, so I hope there will be a new release soon.

great potential, yet it miss important features when it comes to workflow.

it is super stable and support VST 2 and VST 3 and great preformance.

I bought it twice already but I don't use it a lot because it miss lots of important features that kill my workflow..

It doesn't have Parameters learning mode, (not even last touched parameter), so it is kinda hard to find the right parameters that you want to automate in your DAW. - Not to mention that it allows only 8 parameters to be controlled.

the GUI isn't so good when it comes to organization.

when using the search to find plugins it doesn't hide all the unrelated folders, so you need to scroll down a lot...

the preset system also need a better GUI per plugin and per group of plugins, to make more fast chains..

it is still far from being good for my workflow, but I still recommend this if you need a stable chainer.

the updates are not as fast as I expected. so I'm afraid it will take a lot of time till all those features will be fixed.

Great slim piece of software. I use it on a macOS 10.13 with soundflower to have a global equalizer/effect chainer. It saves presets and all in all it's very handy software.

When I started musing around VST plugins I looked for host which would suit my needs. I needed something free that would be usable for live playing or improvisations (as I can't read notes). Fortunately it was time when the Element was just open sourced and it definitely became my home DAW. It's very fast (even on slow machines), has intuitive interface and it's developer is very responsive on Github.

However - it's not built for conventional scenarios. It lacks timeline and all the recording (and sound editing) functions. I actually ended implementing my own four-track recorder VST, but this actually fits my workflow.

Has Potential. At the moment It does not recognize several plugins. There is also no way to load banks or preset .just the default bnks are available. No running engine so that Instruments that depend on that do not workd-like Rps or Blue arp or PM2. lso crashes from time to time. Still I like it and think it will provide a good daw in the future.

You should try the most recent version which is much better than what you describe above.

Yesterday the hold function of the MIDI keyboard worked like it should, today its just not holding the note.

this is one very important functionality of this software for me.

How does one go about fixing that?

Weird it'd just stop working. Bugs can be reported @ https://github.com/kushview/element/issues if I don't get to it first.

Great slim piece of software. I use it on a macOS 10.13 with soundflower to have a global equalizer/effect chainer. It saves presets and all in all it's very handy software.