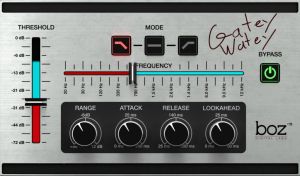 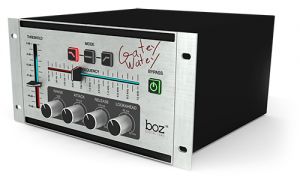 Gatey Watey by Boz Digital Labs is a Virtual Effect Audio Plugin for macOS and Windows. It functions as a VST Plugin, an Audio Units Plugin, a VST 3 Plugin, an RTAS Plugin and an AAX Plugin.
Product
Version
1.0
Product
Version
1.0
Tags
Tags:Noise GateBoz Digital LabsGatey Watey
Effect
Formats
My KVR - Groups, Versions, & More
16 KVR members have added Gatey Watey to 5 My KVR groups 22 times.
Not In Your MY KVR Groups
(or group limitation prevents versioning)
11 0 I Own This
5 +1 Favorites
4 0 My Actual Studio
1 0 My Perfect Studio
1 +1 I Want This

Unlike other gates, Gatey Watey enables you to zero in on precisely the frequency range you want attenuate without the hit-or-miss tweaking of complicated controls, yielding excellent results regardless of your skill level.

Instead of the wibbly-wobbly, timey-wimey stuff* that traditional gates chatter on about, Gatey Watey lets you select the frequencies you want to attenuate for a smooth and natural sound. If you want to shorten cymbal tails without losing the resonance of the kit, quiet singing toms without choking them, or tame the fizz but keep the fuzz on distorted guitars, Gatey Watey will give you the closure you need to move on and mix. Gatey Watey is a forward-thinking, resource-friendly plug-in that not only eliminates the guesswork typical of complicated gates, but also the steep learning curve as well. Gatey Watey is how a gate should work, especially if you want to breeze through the tedious housekeeping processes of noise cleanup and track preparation and focus on creativity.

*Some of our customers have asked if the name, "Gatey Watey" is a nod to the Doctor Who monologue in the episode, "Blink" regarding time not being a logical progression of cause to effect, but rather a big ball of wibbly-wobbly, timey-wimey... stuff. The definitive answer is. .. nobody knows. Nobody.

The reasons for using gates have never gone away: singing toms, too much metal-work on a drum kit, bleed in kick and snare that makes processing troublesome at best, and we haven't even gotten to guitars. Gating is a key element for increasing dynamic range and bringing out the punch and focus of drums in a dense mix. And yes, gates come standard in all DAWs, but how often do you actually use them? And wouldn't you prefer a gate that works without all the histrionics (and hysteresis) ?

In order to increase appeal, gate plug-ins have some complicated and downright incomprehensible controls, yet they still operate on the same principle as analog gates from the days of yore (with names like Kepex). Some argue that gates are outdated technology in the face of powerful DAW editing. For example, there's that clip gain trick used in place of gating, which requires you cut regions, say between tom fills, and reduce the gain of the clip by around -14dB to maintain a natural sound. If you don't have an intern (studio slang for "slave") to do it for you, you'll want something that gets the tedium out of the way. The real question is whether you want to focus on mixing, or spend hours cutting spaces between every snare, kick, and tom hit? And what if you have cymbal or hi-hat bleed you want to get rid of? That's near impossible to edit. Again, wouldn't you rather have a gate that does all that for you in a fraction of the time? Of course you would.

Even gate plug-ins, as fast as they are, have the same problem with transients as their analog ancestors. One clever workaround in DAWs is to copy the track you wish to add gating to, offset it slightly ahead of the track to be processed, and send a sidechain signal from the offset track to the gated track. The offset track opens the gate slightly ahead of the gated track so that transients will pass unmolested. Clever, yes? Well, not really when Gatey Watey will do that for you with its look-ahead feature.

Boz Fun Fact: In the days of recording to tape, gates were used on drums as part of the tracking process. It took a bit of expertise to set the hold and release functions to have the gate close smoothly, but transients were another problem altogether. Since audio signal crossing a threshold opened the gate, a certain amount of transient information was lost, which was further exacerbated by analog tape's tendency to soften transients. To preserve as much of the attack as possible, some devilishly clever engineers came up with an analog look-ahead scheme, which involved placing two microphones on each drum; one mic close to the drum that opened a gate key input (which wasn't heard), and a second mic farther back to capture the sound of the drum. The few-millisecond delay of the transients hitting the second mic after the first one opened the gate allowed the transients to be captured entirely.

Another issue that comes with setting a gate is known as gate chatter, which occurs when audio signal fluctuates above and below the threshold at the tail end of its decay. The gate opens and closes rapidly, causing a stuttering effect. Standard gates have a hysteresis control to deal with that. Yet another parameter that has to be tweaked to sound natural, hysteresis keeps the gate open by a fixed amount below the threshold, allowing the sound to die out without shutting the gate. You'll find this control on SSL and Neve consoles, but not on Gatey Watey. Due to its operating principle, gate chatter is simply not an issue.

Gatey Watey has three mode buttons: high-pass, low pass, and normal gate operation (should you need it). Below these buttons is a frequency slider ranging from 20Hz to 12kHz, which lights red and blue above and below the slider position (and depending on which mode you select). Below the frequency slider are Range, which determines how many dB the gate will attenuate; Attack, which sets how quickly the gate will respond (0ms – 200ms); Release, which determines how fast or slow the gate will close (25ms – 500ms), and Lookahead, which ranges from 0ms to 50ms. The Threshold slider on Gatey Watey's left side also lights red and blue coinciding with the frequency slider and mode so you can see what's happening graphically. And finally, a bypass button lives on the right side of the GUI.

Why Gatey Watey when there are so many gates—even ones for free?

As we briefly touched on in the beginning, Gatey Watey has one feature that sets it apart and makes it a must-have for anyone who has struggled with gating: frequency-selective attenuation. To put it simply, when the input drops below the threshold Gatey Watey will attenuate only the high frequencies or only the low frequencies based on selected mode switch and your selected crossover point. That ability makes Gatey Watey extremely powerful when it comes to gating drums, electric guitars, or pretty much anything that requires a gate.

For example, if you want to cut the hi-hat bleed from a snare without killing the ring of the snare, better call Gatey Watey (sorry Saul, this is out of your league). Do you want your distorted guitars to ring out without electrical hum from fluorescent bulbs or neon lamps blaring through your pickups? Gatey Watey to the rescue. You can even use two instances of Gatey Watey if you'd like to gate specific high and low frequencies simultaneously. Even in normal gating situations, Gatey Watey excels. You just tell it what to turn down and how much to turn down and Gatey Watey takes it from there. On the other hand, if you get stuck in 1969 without a TARDIS, you'll just have to wait it out until Boz invents Gatey Watey (and don't point your timey-wimey detector at a chicken. .. it's not pretty when they blow.).

Gatey Watey was designed to be dirt simple to use. It does its thing, and it does it well. Regardless of your engineering experience, you'll able to open up Gatey Watey for the first time and immediately get the hang of it.

While you're pondering the cultural references of Gatey Watey, download a copy and see for yourself how easy it is to get great results.