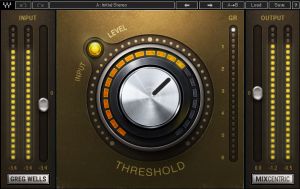 Using EQ, compression and harmonic distortion to process your master buss or groups, the Greg Wells MixCentric plugin enhances and balances the tonality of your mix. Combined with your limiter of choice, it brings your mix up to par with fully mastered and released material.

Whether used in mono or stereo mode, this plugin gives users direct access to Greg Wells' signature sound with the turn of just a single knob.