Login / Register
My KVR0Updates
00 items | $0.00 CHECKOUT New
Plug-in Developer?
Search
Who are we in the KVR community in 2020?VOTE NOW
Guitar Gadgetsby

Guitar Gadgets by Musical Entropy is a Virtual Effect Audio Plugin. It functions as a VST Plugin and an Audio Units Plugin. 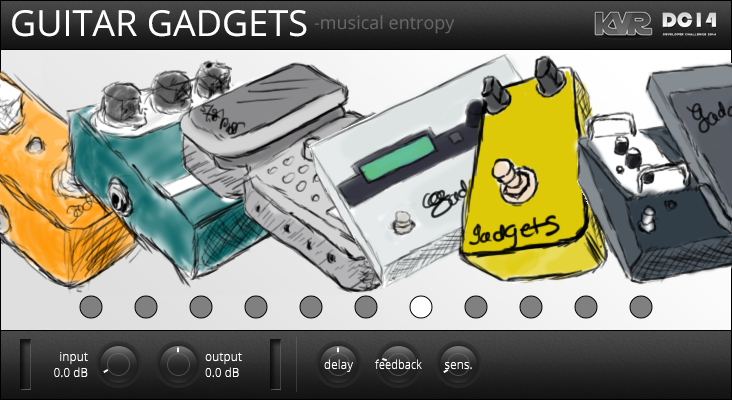 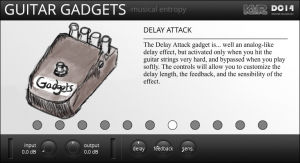 Guitar Gadgets is a compilation of "false" analog guitar pedal simulations, made to be used mainly with electric guitars and guitar amp simulations, but which may be sound interesting in any situation. The focus here wasn't to design classic effects, but weird, strange, ugly or "different" ones instead. The effects included are the following:

There is also a surprise somewhere (see the official thread on KVR forums for that !), some shiny animations, and a lot of fun I hope. Indeed, I tried to develop effects that are really amusing to use, and give sounds you don't often hear from your playing.

New with version 1.1.0 : now you can chain up to 4 gadgets in the same plug-in instance, and use the right click on any control to assign it to any MIDI Control Change (MIDI Learn). Moreover, you don't need anymore to play the easter egg game to unlock the HOT switch, even if doing so is still rewarding with new pedal skins.

New with version 1.3.0 : Sideways is a new auto-swell-like effect. If you're a ponytail Millennial born 6 months ago who can't decide what gender you are, don't bother; this isn't for you. It won't enhance your acoustic guitar. When you use it, it harms Mother Earth. But for the .00017% of the music-involved populace who possess fully intact cerebral cortexes, you owe it to yourself to look into this plugin.

Great set of guitar effects. I have been a huge fan of the Line 6 auto-swell effect and this set of effects does a great job of emulating that. Super impressed with this plugin.

Guitar gadgets is, to put it in a nutshell, a neat idea well executed. A collection of several guitar pedals, sound wise mostly on the wild side, with nice graphics and some introductory lines what the chosen pedal does and maybe how to use it.

The quality and practical usability of the effects varies, though, the flanger is great, the cassette tape emulation fun, the reverb special, but the delay and slicer (SlicR in today's web speak) don't really appeal to me. This may be personal though, and others may find use for them. Apart from that, there are eleven pedals and the plugin is free, so no real criticism here.

Usability is good, as with most real world pedals there are only few knobs to tweak, plus there's the input gain which can change the way some pedals work, and an output gain to control the havoc. One could argue whether the nice pictures and text are too gimmicky and instead rather have the possibility to chain the pedals (that would be cool indeed), but nevertheless it is a nifty little plugin for all experimentally oriented guitar players and other weirdos.

Average user rating of 4.67 from 3 reviews

MeldaProduction updates all plugins to 14.07