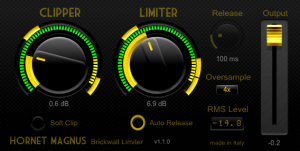 HoRNet Magnus by HoRNet is a Virtual Effect Audio Plugin for macOS and Windows. It functions as a VST Plugin, an Audio Units Plugin, a VST 3 Plugin and an RTAS Plugin.
Product
Version
1.1.0
System Requirements
XP, Vista, 7, 8
Product
Version
1.1.0
System Requirements
10.5 or above, Intel Only
Tags
Tags:Brickwall LimiterDynamicHoRNetHoRNet MagnusLimiterMastering
Effect
Formats
My KVR - Groups, Versions, & More
11 KVR members have added HoRNet Magnus to 6 My KVR groups 15 times.
Not In Your MY KVR Groups
(or group limitation prevents versioning)
9 0 I Own This
2 0 Favorites
1 0 My Actual Studio
+3 in private groups

Magnus is a 2 stages brickwall limiter, its purpose is to make your tracks the loudest possible.

To achieve this the limiting process is divided in two steps: the first is a clipper, hard or soft, that let you cut away those small peaks that nobody is going to hear, the second is a limiter with a fixed threshold of -0.2dB.

Simply use the two big knobs to increase the level until you are getting the right amount of gain reduction by any of the two stages. Do you have a very percussive track? Use more clipper to cut those sharp transient and let the limiter work less. A soft song? Abuse of the limiter and don't use the clipper.

The limiter in Magnus is a quite sophisticated tool, the attack it's instantaneous and the release is made by two different stages, the first one is very short and the second is longer so that the plugin is able to recover fast from sudden peaks but able to keep a sustained level to avoid obvious pumping.

Going into technical details, the release time set with the release knob is the time of the longer envelope, the short one is exactly one fourth, so that it will always musically match the tempo of the song.

If you are unsure, use the Auto Release button that sync the release time with the song tempo reducing pumping as much as possible also when generous gain reduction is going on.