Limiter by kiloHearts is a Virtual Effect Audio Plugin. It functions as a VST Plugin, an Audio Units Plugin, an AAX Plugin and a Rack Extension Plugin. 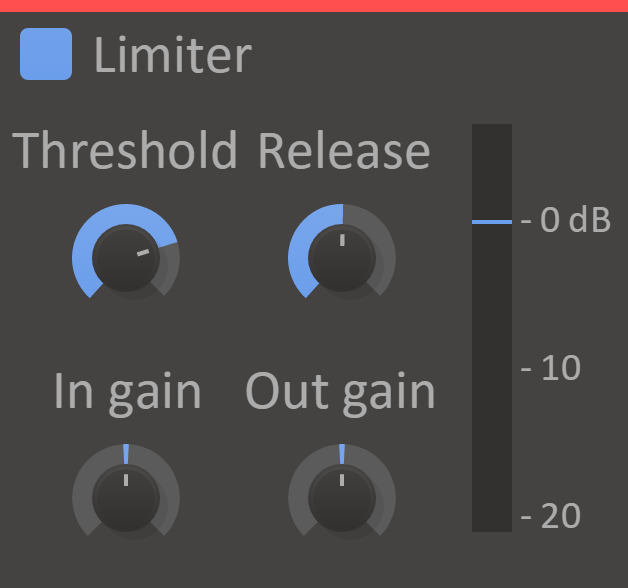 Whether you want to crank the last drops of gain out of your track or just want to control a few loud peaks, a Limiter can be the weapon of choice.

By looking a little bit into the future, a limiter can make sure your signal never goes louder than you want it to without distorting or destroying transients:

Limiter shines on it's own, but it was primarily created to power up the different "Snapin Hosts" Kilohearts offer. These are bigger effects units that utilize all the available snapins and give you a really fun and creative workflow for combining them in any way you can think of. So have a look at Snap Heap and Multipass right now.

Limiter is also available as a Rack Extension for Reason over at the Propellerhead shop.

I've been trying free limiters for a while and after many tests I concluded this is one of the best (Vlad G Limiter No. 6, Sonic Anomaly Unlimited, Loudmax, Xhip Limiter, Dead Duck Limiter, ReaComp with or without precomp, W1 Limiter and many others).

1) Really transparent: And it doesn't add any color at all until it starts reducing gain. Excelent for mastering.

2) Simple: Very similar to the old Waves L1 so many people are familiar with.

3) Very low on CPU: Maybe not as light as Loudmax but close to it.

4) It has lookahead: "It looks into the future" so it doesn't distort too much.

5) A latency-free bypass button: The blue square at the top left.

6) It can be resized up to 500%: From the bottom right corner (there are some little bars there to show you where to drag).

1) It doesn't have oversampling/antialiasing: This is something that only Limiter No. 6 has from any free limiter, and in terms of quality (mostly for mastering) should be a must for preventing aliasing distortion. It has another antialiasing technique involved though.

2) The VU meter is unreliable: Not because it shows wrong values, but because depending on the release it can operate really fast to see how much it's reducing. Also, it's too small to see how much you're reducing unless is kinda drastic (or if you resize the plugin a lot).

3) Release Knob: Just like the Waves L1 it has a manual release knob and this sometimes can be annoying as the only thing the plugin needs to do it's to reduce peaks, and finding the correct release time can take some time.

4) The threshold only goes down to -20dB: Not too much of a problem given that this plugin has Input and Output gain.