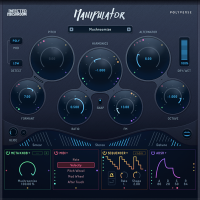 Manipulator by Polyverse Music is a Virtual Instrument and a Virtual Effect Audio Plugin for macOS and Windows. It functions as a VST Plugin, an Audio Units Plugin, a VST 3 Plugin and an AAX Plugin.
Product
Version
1.4.9
System Requirements
Windows XP and higher
Product
Version
1.4.9
System Requirements
OS X 10.6 and higher
Tags
Tags:Vocal ProcessorManipulatorOctave Down Pitch ShifterOctave ShiftPitch ShifterPolyverse MusicUniversal 2 BinaryVocal EffectsVocal EngineVocal Harmony
Instrument
Formats
Effect
Formats
Copy Protection
Other
My KVR - Groups, Versions, & More
61 KVR members have added Manipulator to 11 My KVR groups 75 times.
Not In Your MY KVR Groups
(or group limitation prevents versioning)
33 +1 I Own This
17 0 Favorites
11 0 I Want This
6 +1 My Actual Studio
2 0 My Perfect Studio
+6 in private groups

Award-winning electronic duo Infected Mushroom have released version 1.0 of Manipulator, a real-time vocal processor boasting an array of 10 unique pitch shifting and timbre bending effects. This is their second release with Polyverse Music after the success of their first plugin, I Wish.

Manipulator can warp the sound of vocals and melodic instruments beyond recognition, or subtly add character to a performance. It can even be played via a keyboard to control pitch on the fly, as well as a slew of other effects. The result is a creative way to take a natural voice and transform it into ethereal choirs, guttural granular textures, twisted robotized voices, and even more. Infected have used Manipulator extensively in their new album, Return to the Sauce, including their track with the new processor's namesake.

Manipulator's algorithms are based around 5 main effects: pitch, formant and harmonics shifting, FM and grain alternation. Included for even more manipulation are supporting effects such as glide, smear, stereo and detune.

The real-time capabilities of this plug-in make it perfect in live situations for vocal performers and instrumentalists. Whether in the studio or on stage, users can play their MIDI controller to change the melody of a performance at zero latency. This feature also enables on-the-fly harmonies, with up to 4 voices of polyphony.

Manipulator is available in VST, AU, and AAX formats, making it compatible with a variety of host applications including Ableton Live, Logic, Pro Tools, Cubase, FL Studio and Studio One. It can be used in 32 or 64-bit instances with Windows XP and later and with Mac OS X 10.6 and later.

A demo version is also available.

Very few plugins can warp vocals as well as this does. This isn't meant to be a pitch correction plugin that leaves your pretty little vocal otherwise unscathed. Think of it more as a vocoder on steroids. If you are looking for pitch correction, get Melodyne. It's the best. If you are looking for vocal robotics, mind-warping midi-controlled pitch, formant and other changes, this is one of the best plugins out. I've been very happy with it, though I have no illusions about what it is appropriate for. If you're looking for Autotune, move along.

PS: Polyverse put out a couple nice tutorials as well, to break us out of a mental box.

Being a new to vocal processing software and being an impulsive person, I bought Manipulator. I wasted 118 GBP. There is nothing Manipulator can do that could not have been achieved by many examples of freeware vst. That's not to say there is lots of free software similar to Manipulator but in combination, free software can make a pig's breakfast out of an audio signal just as Manipulator does all by itself.

If you like your vocal tracks to be clear, Manipulator will be of no use to you at all as it seems to add many extraneous random sounds. Weird wandering sine waves, little whistles, drones and pops abound.

Amid a plethora of 99 cent shop Sci Fi audio FX presets, are perhaps as much as 3 (ish) usable settings. All the other presets, and there are lots and lots, are of use only if you work on low budget Sci Fi and must edit audio so that the 'alien' actors sound like frogs with sore throats or pigs inhaling helium... with sore throats. Or Darth Vader... with a sore throat.

Seriously, it's really very difficult to think of any work, any vocal where Manipulator would not completely screw up the audio signal and render the output literally painfully uncomfortable to listen to. I challenge anyone who is not engaged producing poop noises and silly voices for cartoons to say they are happy with this example of vst.

The makers of this plugin mention 'algorithms' and there's a whiff of the disingenuous about that. Mathematics is not the tool needed to create Manipulator's sounds. It can be done with mathematics but there's no need to go to such trouble. All that is required is plenty of electrical interference and lots of old worn cables and loose fittings on ancient, knackered obsolete and incompatible equipment. That has the exact same effect on audio signals and is far, far cheaper.

You'd have to be as daft and inexperienced and impulsive as me to buy Manipulator, or 'Audio Signal Shredder' as I have more accurately renamed it.

It could have been just as accurately named, 'The Emperor's New Clothes.'

Just bought Manipulator and after playing with it for a short while I must say this thing works really well with - not just vocals but with other instruments too such as drums, synths, basses.. everything. You can create some totally unique, twisted and never-before-heard effects and movements with this. Awesome plugin.

as much as i like the band (at least until their last offering which just didn't hit home for me, but, hey, that's only my opinion) so i have tried their plugins and can only say that they are WAY overpriced for what they are, which is what most people already have in some other form, i still use stuff from smarteletronix which does the job for me. i can't see this selling much at all...

and the Polyverse site is down from my end...