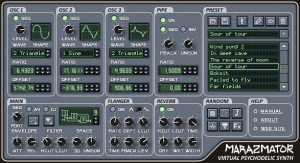 Marazmator by Stone Voices is a Virtual Instrument Audio Plugin for Windows. It functions as a VST Plugin.
Product
Version
2.3
System Requirements
32/64-bit Windows NT famaly
Tags
Tags:Synth (Hybrid)MarazmatorMulti ModulationStone Voices
Instrument
Formats
Copy Protection
None
My KVR - Groups, Versions, & More
32 KVR members have added Marazmator to 11 My KVR groups 40 times.
Not In Your MY KVR Groups
(or group limitation prevents versioning)
16 0 Favorites
10 0 I Own This
4 0 I Want This
3 0 My Actual Studio
1 0 My Perfect Studio
+6 in private groups

VSTi-plugin «Marazmator», is the virtual synthesizer creating unusual sound forms. The subject of sounds strikes with the variety, it both sound space plots, and the natural phenomena, sounds of technical character (engines, mechanisms, the tool and тп), different voices, and sound objects which are simply not giving in to any description. The synthesizer can be used in different genres and the directions to the modern electronic and experimental music such as: Ambient, Chillout, Industrial, Noise, Dub, Jungle, Drum'n'Bass, Trance and so forth. It can be used as the generator of special effects in audio tracks for different applications, games, theatrical performances, movies (documentary, a fantasy, mysticism and etc.). With its help it is possible how to create the very long on time morfiruyemy sound forms, and rhythmic repeating - loops (Loop). We hope that by means of this plug-in you will be able to bring new sound forms which will surprise listeners to this world, will make your music more various and more interesting.

Marazmator - a monothematic synthesizer as polyphony in this case doesn't make a sense, synthesizer sounds in most cases have no musicality determination. But for the organization of the polyphonic mode if that is required, it is necessary to create several enkzemplyar of a plug-in.

Functionally, the synthesizer is a set of the functional units:

Banks with presets, sequencer patterns, and also the detailed reference guide in the English and Russian languages are a part of a set of installation in addition to the synthesizer that considerably simplifies use of this plug-in.

doesn't work under mulab or vsthost.

The lie, Marazmator works in Mulab. See a screenshot.