Minky Starshine by Expert Sleepers is a Virtual Instrument Audio Plugin for macOS and Windows. It functions as a VST Plugin, an Audio Units Plugin and an AAX Plugin. 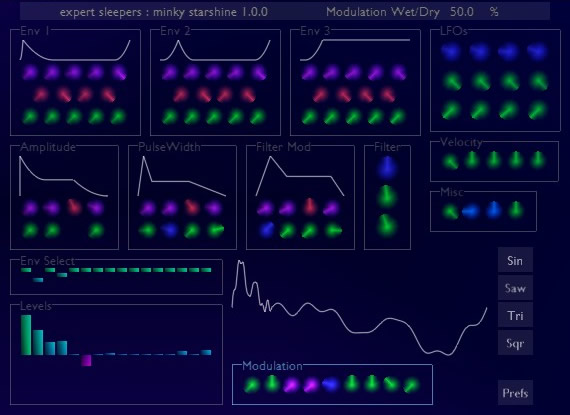 A waveform is created by summing 16 independently controllable 'partials'. By setting the relative levels of the partials appropriately you can create familiar waveforms such as sawtooth and square wave, but you can also create an infinite range of timbres in between.

As well as simply setting the levels of the partials, you can flexibly assign them to three 'groups'. Each group has a very flexible envelope generator and an LFO, so you can change the balance of the partials (and therefore the timbre of the sound) over time.

The LFOs have a wide frequency range and can also be used as ring modulators.

The waveform as a whole can have its pulse width controlled. An envelope and LFO is provided, as well as control by note velocity.

A resonant filter is available, capable of lowpass, bandpass and highpass and a continuous range in between. Again, control by envelope, LFO and note velocity are possible.

A flexible modulation section is provided, capable of chorus, flange and delay effects.

The factory presets showcase some of the range of sounds that can be produced.

I've had Minky Starshine for two weeks now, have incorporated it in multiple projects and now feel comfortable saying that it is probably the best introduction to additive synthesis you'll find for the price.

The UI does come off as archaic and even baffling perhaps at first, with no knobs labeled. Upon mouse-over though things begin to make sense and a quick look at the online manual -- recommended whether you know additive synthesis or now -- will quickly uncover much of the mystery. This approach to UI design does make for a cleaner, probably smaller overall footprint on your screen and does become intuitive after the first few hours. There is an option to have labels displayed immediately beneath the controls if you can't be arsed to look at the top of the UI, which when activated displays the specific value and name of each control as you mouse-over it.

As far as presets go, this is not a preset-user's paradise... the 32 presets that are included show just the basic capacity of this synth. Full disclosure: i first came to this page in hopes that someone had released another preset pack! But for $29 i don't expect the 1000's of presets you get with higher priced synths.

The sound quality of Minky Starshine was the true dealmaker for me. Although it has no modular capacity, the routing of the 4 lfos and the 3 selectable envelopes-per-partial are rather sophisticated and lend themselves to great experimentation. You can conjure all sorts of strange PWM, fm-like metallic whirring and swelling pulses to show up with just a basic understanding of how the envelopes and LFOs interact. The Filter is infinitely variable between LP, BP and HP, and this too can be modulated by an LFO. Even without a true modular matrix, the options that are hard wired make sense and give rise to some unique results. There is a basic modulation effect that can give your tones a chorusing, as well as delays and flanges (which all come from the basic circuitry template). I find myself using this only to create a spreading of the basic tone, which can feel a bit mono otherwise.

For those unfamiliar with Additive Synthesis, or get baffled by other additives that offer 512+ partials and a slew of jargon to sift through, Minky Starshine is for you. My only warning though is that like all additive synths, you should still expect to learn for an hour or two to grasp how additive synthesis and PWM work together. It won't hurt though, i promise.

Wishlist for future updates: Tempo-sync'd LFOs, 2 additive oscillators (or more!), higher/selectable number of partials to work with (up to at least 64 would be nice). Panning controls/LFO's.Read Review

rncbc.org updates Vee One Suite for Linux to v0.9.18