Moneo by BetabugsAudio is a Virtual Effect Audio Plugin for Windows. It functions as a VST Plugin. 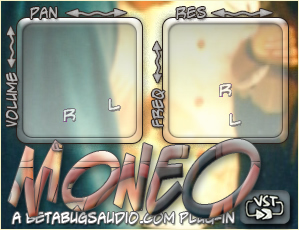 Plug-in, App & Soundware Format(s)
Operating System Availability
Miscellaneous Information
Moneo is a stereo plug-in which treats each channel as a separate monaural source. Each channel may then have its volume attenuated, its position in the stereo field panned, and its sonic character altered with a resonant low or high-pass filter if you so choose. Moneo is equally comfortable with basic functionality (forcing mono) or inventive destruction of a source's original spatial and spectral identity.
Latest User Reviews Average user rating of 4.00 from 1 review
Read all reviews Add A Review

Sometimes you want to shift a stereo image, such that it spans from the left speaker to the center, or something like that. Traditional panning won't achieve that, because it's only balancing between the left and the right - the mid point is the fulcrum. Enter Moneo, it's free and it's in my toolbox because it's the only way I know of how to do this!

Haven't used the inbuilt resonant filter, because I have dedicated payware for that, but this is a godsend for mix balancing and moving spaces around. Just place each channel where you want to reposition it on the pads and you're done! Simples! Sounds good (asin it doesn't tarnish your precious audio signals) and is easy to use and free! I give it an 8 because really, it's nothing mind-blowing. There are much more exciting freebies out there. I'm not a fan of that "mixtape" font and the GUI graphics, particularly... But that doesn't detract from it's usefulness!

Very handy utility! Thanks to the developer!