Morphology by Zero-G is Soundware (e.g. samples or presets that load into other products). 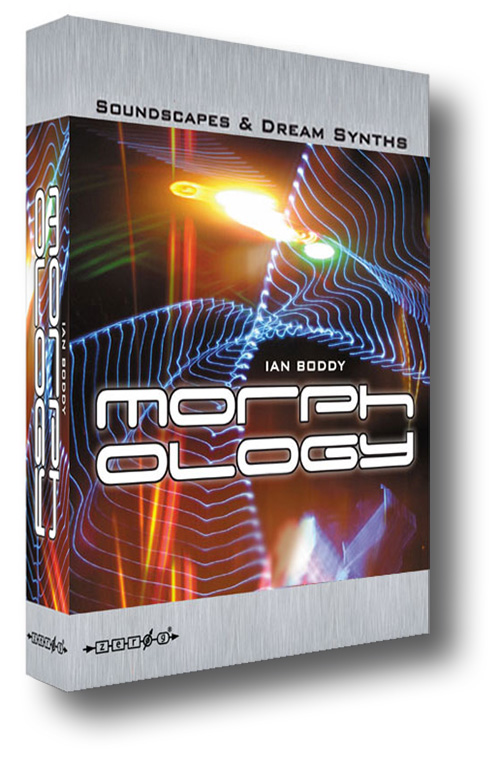 Morphology provides evolving soundscapes, dream synth patches & samples for film composers and sound designers, all created from scratch by IAN BODDY, one of the UK's most celebrated synthesists, and a veteran of the European electronic music scene. Ian's exclusive sound archives and arsenal of vintage and modern synths have been extensively plundered to create this awe-inspiring library.

Morphology is an amazing world of soundscapes that morph and evolve over time, ranging from the awesomly beautiful to the teeth-grindingly nasty. And a range of gorgeous synth pads using meticulously crafted multi-sampled analogue waveforms. All presented in powerful and easy to use instrument patches for NI KONTAKT. In short, sounds that will inspire you to make your own music.

If you are wondering whether Morphology is for you, well you can learn all you really need to know from the press reviews below (these reviews are of the discontinued NI-Powered Plugin version of MORPHOLOGY which included the same sample library, so any comments about the library itself or about the Kontakt/Kompakt programming are valid for the download version too).

"Outstandingly moody and emotional sounds, effects and ambiences... A potential lifesaver in music-for-picture applications, and killer for music composition too....The size of the sound library is impressive... There's a lot of quality material here. Harmonic Loops holds some of the most beautiful sounds in the entire collection. They'd be great for communicating longing, sorrow, tears of joy. Strong but quiet emotions. They're the kind of thing that'll likely turn up in a lot of TV movies... Big kudos to Boddy's collaborator Markus Reuters for his contributions here... it could be argued that Boddy's done all your work for you... but some composers will likely thank their lucky stars for the completeness of some of these patches. They're a potential boon to the music-for-picture crowd. But in the final analysis, this work is so well done, so imbued with mood and emotion, that it's a pleasure to recommend it"
- KEYBOARD magazine, USA.

"It's worth buying simply for the sounds. They'll blow you away... The samples were created by veteran synthesist and electro-musician Ian Boddy... Ian's style makes much use of textures; he's a past master of analogue synthesis and seems to be able to wring the last ounce of potential out of a sample... The samples are best described as evolving, morphing, multi-waveform sounds - full of interest and excitement. They range from the subtle, calm and inspirational to down and dirty, hard industrial tones and drones... A good selection of pads and arpeggiations, bells, clusters, pitched and noise-based effects. The Harmonic Loops are particularly musical and inspirational, while the Voices collection ranges from the angelic to the demonic. Ian Boddy has certainly brought all his skills and expertise to bear in the creation of these sounds... There's no denying the quality of the material here... A stunning collection of sounds suitable for use in a wide range of music, particularly styles with a synth or electronic foundation. Some textures would even fit well into a rock or pop context... Ian Boddy says that the collection was designed to "inspire you to make your own music" - and if you have a soul, that's what it will do. If the muse has left you, play these to encourage its return"
- MUSIC TECH magazine, UK.

"Morphology is an easy-to-use packaging of a sample library that sounds great. I can imagine it finding a home in many post-production and soundtrack studios... Boddy has done a great job with Morphology of producing interesting, usable sounds"
- GROOVES magazine, USA.

"Seemingly endless, evolving textures kissed with just the right effects to create emotionally charged soundscapes... an evocative journey of constant movement through time and space... Morphology is as ideal for film work as it is a source of unique transitions for trance and house anthems, brilliant backdrops for downbeat, or quickly adding character to pop tunes"
- REMIX magazine, USA.

"Morphology should please anyone who's into realistic-sounding analogue synths or evolving textures, and even if you already have Spectrasonics' Atmosphere, it offers a different take on the genre. All in all, this is a pretty impressive workshop of weirdness that manages to be both different and musically useful"
- SOUND ON SOUND magazine, UK.

"...Common to most sounds is the evolvment over time. This is really good as sounds rarely become static. They are also good in the respect that they don't steal the attention from the pictures whose impact the sounds are meant to amplify... After having used Morphology for a while I realize it has made me think of music even more from a visual perspective. Very interesting and conductive to musical development..." (quotes from the review of Morphology in FUZZ MAGAZINE, Sweden).

Zero-G wins with this simple and ready to go soundscape and ambient sound generator. There area 3.2 gigabytes of data to work with in Kompakt's synth engine. The engine features a great deal of visual feedback, better than average synth features and acceptable effects, if you even bother.

There are hundreds, if not thousands of atmospheres and rolling, boiling, moving sounds that are easy to assemble your own patches and MULTIS. A MULTI is nothing more than using any of the 8 channels available polyphonically. They can be set to all one channel or eight different ones. There are many strategies you may try. In any case the MULTI strategy is a good one as you can set up animated sounds with each sample you use. While not much for leads or basses Morphology is great for mood. At $160 street price you aren't going to do much better and for the price of a few loop libraries you can do your own and best of all, since the CPU use is light you can do so with very great detail.

A must for film, ambient, even harder music styles that need drones and sounds that make impact they are here and they are super easy to program. In terms of value, incredible value. In terms if you need it, ask yourself if you can make similar sounds. If you have a lot of synths and time to make perfect loops then you dono't need Morphology. If time is valuable to you then Morphology is close to essential. Keep in mind this is not phenominal sampling, more like great taste in general.

And if you are a Kontakt user, you will be able to work with Morphology providing you purchased the 1.5 upgrade. It is a worthwhile synth even when it becomes apparant the samples are highly developed. Forget that and listen to what you have to work with. It can be a humbling expeience.

Here's what it comes down to. There are sounds, even pitched ones, that are of use in many styles of music and you can do a good amount of your own programming. If that worries you a day with Kompakt and reading the manual and you'll be much more confident. Unlike the loop libraries so many people purchased, you don't have to sound like everyone else as you can find your own voice within the aether of floating sounds and jackhammer noisescapes.

Recommended for anyone interested in all types of ambience, new programmers wanting to learn without messing up - it's hard to do so in Morphology. If you like this kind of abstract work Morphology will keep your work fresh and unlike others, even other Morphology users.

Simple, but simplicity is often the makings of vastly complex sounds. This is a specialized synthesizer but Morphology could easily be the one synth you need to compose with. As a composer I like changing timbres around and can strongly recommend Vapor by East West as a companion synth. As a specialist Morphology is wonderful, as anything other than it's specialty Morphology is two dimensional. If moods of all sorts is your thing you will be very happy and lost in Morphology's depth of sonic worlds.Read more

AU MIDI out on Macby Forgotten @ 3:14 in DSP and Plug-in DevelopmentView All Latest Posts