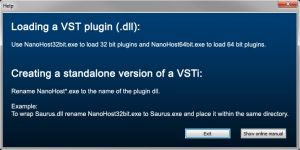 NanoHost by Tone2 Audiosoftware is an Audio Plugin Host and a Standalone Application for Windows and Linux. It functions as a Standalone Application. It can host VST Plugins.
Product
Version
1.0
System Requirements
Windows XP / Vista / 7 / 8 / 8.1 / 10 (32-bit or 64-bit)
Product
Version
1.0
System Requirements
Wine
Tags
Tags:VST WrapperASIOLiveMinimalistNanoHostPlug-in To StandaloneRecordingSound DesignTone2 AudiosoftwareToolVST HostWrapper
Can Host
Instruments
Other
Stand-Alone Utility / ApplicationDevelopment Tool
Sample Formats
Loads and/or Saves
FXB, FXP
Copy Protection
None
My KVR - Groups, Versions, & More
31 KVR members have added NanoHost to 10 My KVR groups 46 times.
Not In Your MY KVR Groups
(or group limitation prevents versioning)
20 0 Favorites
10 0 I Own This
6 0 I Want This
3 0 My Actual Studio
2 0 My Perfect Studio
+5 in private groups

Tone2 NanoHost is a free, minimalist host application which can load VST-synths. Furthermore, it can act as a wrapper which converts VST-synthesizers into standalone applications.
This tiny tool works best for live-performance, sound-design, jam-sessions and testing.

What is special about NanoHost?

Average user rating of 3.00 from 1 review
Read all reviews Add A Review
Report

It is kind of a version of Savihost. A such, it works nearly identical.

Since discussions are disabled on this vst-host, I will put my main critique here:

It forgets its second, third and fourth MIDI Devices from one start to another in the 32-Bit-Incarnation.

With several MIDI Devices, you always have to activate them.

Compared to the 32-Bit-Minihost from Tobybear (which is payware, but can be used with a nagscreen without limitations), it doesn't start without a plugin and therefore has no possibility to open a VST from a history (Windows or its own).

For a vst64host it is nice to have it, since several developers are beginning to abandon 32-bit.

But it should be improved for a bit more usability. The aforementioned Minihost has a much bigger feature set.

I use those vsthosts directly on VST dlls to "open with" them, which is the fastest way to test plugins (which don't need installation), and the biggest shortcome of those hosts is that they cannot load a second VST (for example, to test effects), except ashost, which is a bit instable, and Cantabile 2.0 Lite, which is more heavyweight and checks the plugin directory first.

However, since Savihost is already existing and working, I don't quite understand the purpose of Nanohost, except as an advertizing platform for Tone2.