$75.00Buy BUYING!X
KVR Marketplace
ResonHeart by Xhun Audio is a Virtual Instrument Audio Plugin for macOS and Windows. It functions as a VST Plugin, an Audio Units Plugin and a VST 3 Plugin. 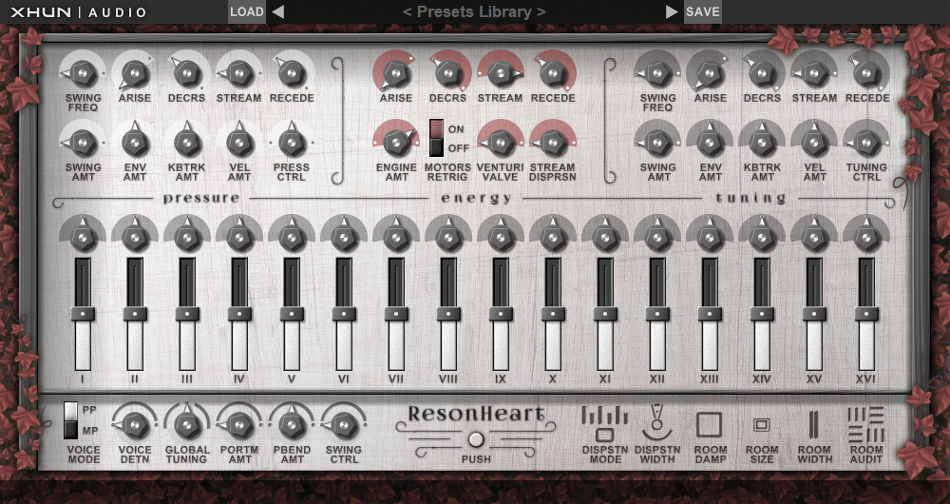 ResonHeart is the physical modeling simulation of a never seen before, experimental, aerophone-based acoustic instrument.

Characterized by a complex modal-based architecture, this original machine has expressly been built to mimic the sound of different families of acoustic instruments - like winds, membranes, chromatic percussions, ethnic lutes and whistles, glasses, cymbals and crashes, vocal ensembles and choirs, or even an entire orchestral strings section - as well as to produce very unconventional, organic tones, evolving textures and expressive motion pads.

Working on the principles of fluid dynamics and designed to potentially be a real-world replicable machine, every single component inside ResonHeart has been modeled after existing hardware - commercially available devices like air pumps, pneumatic valves and metal resonators. Also the surrounding room acoustics has been carefully modeled, simulating a wide range of spatial environments, from small chambers to big concert halls, to stone-walled cathedrals and beyond.

I did not find this product (which seems interesting though) on the Xhun Audio webpage.
Has it been announced too soon or is it a discontinued product ? thanks.

ResonHeart has *just* been announced, it will be released very soon. Obviously, a full product page on Xhun Audio website (www.xhun-audio.com) will be available upon product's release.

Thanks a lot for your (very fast) answer and reactivity.
This is a great news. I am looking forward reading more about it soon as I already own all your software VSTs (which are really good by the way) and above all I am "fade-up" (to stay polite;o) with all these sampled instrument taking "ages" to switch from one presets to the other / filling my hard disk.

When I hear instruments VSTs developed by Pianoteq, IK Multimedia, AAS, etc (that I own as well by the way) I think that physical modeling is really the way to go now.

I would say it is it is also "pleasure" to support developers (by buying their software) who are innovating by creating new (kind of) instruments. Thanks a lot for that and keep on your good work.

Thank you so much for your support Eric, :).

Looking forward to trying this out!!!! Is there any idea of a release date?

Hi, just a matter of days/weeks... No delays, I promise.

Love the leaves on the UI :) (seriously).

Thank you, I planted that hedera 1 year ago :).

Can anything compete with DIVA or Repro in 2020?!by BONES @ 4:21 in InstrumentsLive 10 : How do I map the VST knobs in Novation SL MKiii permanentlyby cowby @ 4:04 in Hosts & Applications (Sequencers, DAWs, Audio Editors, etc.)

2020 Your fav hardware step sequencerby pekbro @ 4:00 in Hardware (Instruments and Effects)Shade: filtery thing from UVI. :)by revvy @ 3:48 in Effects