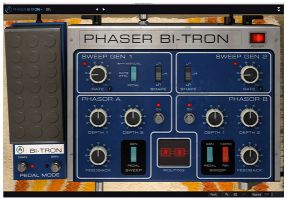 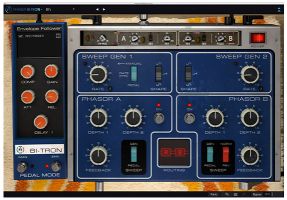 Phaser BI-TRON encapsulates the transcendent quality of an undisputed trailblazer of the modulation world. Soft 2-pole flutters, wild asynchronous movement, resonant swirls suspended in orbit - there's nothing quite like it.

It all starts with 2 Independent LFOs, featuring switchable waveforms and rates that can be tempo synced. Tweak both in tandem for unpredictable interplay, resulting in all manner of animated sounds.

As well as 2 LFOs, you get 2 'Phasor' circuits to play with, with independent depth, feedback and modulation source controls.

We analyzed the much-loved tonal nuances of the original pedal, taking extra care to emulate them in great detail for a perfectly authentic response.

The expression pedal feature lets you manipulate both LFO rates and both Phasor circuits, with the additional option of envelope control.

Phaser BI-TRON can be run in mono or stereo, series or parallel. This results in an unprecedented stereo modulation palette, each mode offering a distinct sonic character.

A curated selection of 37 presets, giving you instant access to the double-barrelled energy of Phaser BI-TRON.

The humble phaser was one of the first widely-available guitar effects on the market. Achieved by the relatively simple means of modulating all-pass filters on an input signal, it's a sound that's as recognisable as it is divisive. No modulation collection is complete without a phaser - and as the world's first dual phaser, the Mu-Tron Bi-Phase stood out from the crowd. Popularised by everyone from Smashing Pumpkins to Prince, Kraftwerk to Chromeo, it's evident that the pull of stereo functionality, interweaving modulation, and analog charm was impossible to resist.

Arturia set about studying, remaking, and enhancing this prized handmade effect. Using their proprietary TAE technology (True Analog Emulation), they wanted to replicate every subtle detail, every sonic trait - even the control panel and expression pedal functionality. Phaser BI-TRON is every bit an analog dream, primed for your virtual studio.

The key to Phaser BI-TRON's colorful sound is the fact that everything is doubled. Independent sweep generators (LFOs) offer 3 waveforms each, tempo sync, and the option of pedal control. These can be used to modulate both (or either) of the 2 Phasor circuits, each with their own LFO depth, feedback and pedal controls. The pedal can even be switched from manual control to an envelope follower, for a responsive sidechain effect.

The magic of the dual LFO & dual Phasor setup really comes into its own with the elaborate routing options.

Rather than simply behaving like 2 phaser pedals stuck together, Phaser BI-TRON's emulated circuits can be rerouted in mono or stereo, series or parallel - unlocking the nuances of analog pedal behavior and giving you total control over the spatial character of the effect.

Analog effects are sought-after not just for their specific purposes; there's charm in the warm dynamic response of their components. No emulation of an analog effect would be truly complete without it. Phaser BI-TRON has been tirelessly modeled to preserve the subtle nuances of vintage circuitry - authentic to its core.