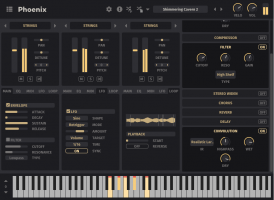 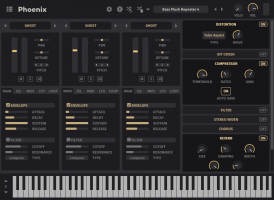 Phoenix: Mirage by FrozenPlain is a Virtual Instrument Audio Plugin for macOS and Windows. It functions as a VST Plugin and an Audio Units Plugin.
Product
Version
1.0.3
Product
Version
1.0.3
Tags
Tags:Cinematic SynthsAmbientAtmosphereChoirCinematicFrozenPlainKeysPhoenix MirageStringsUnderscore
Instrument
Formats
My KVR - Groups, Versions, & More
6 KVR members have added Phoenix: Mirage to 3 My KVR groups 6 times.
Not In Your MY KVR Groups
(or group limitation prevents versioning)
4 0 Favorites
1 0 I Want This
1 0 I Own This

Cinematic Synth based on Smooth Synth Strings and Choirs

Bring new lush atmospheric dimensions to your productions with Phoenix, a sound design VST/AU synth. This instrument is based on a set of smooth synthetic strings and choir samples. These can be used to create wide strings backdrops and ethereal choirs instantly. Phoenix takes these sounds to the next level with the sample-based synthesis engine that powers it, Mirage. With it, you can process the instruments in three separate audio layers, with envelopes, LFOs, filters, and a whole rack of effects.

The result is a sound design tool perfect for creating cinematic pads, keys and basses, and for easy underscoring. Examples of such sounds are included in the 80 production-ready presets that come with the product. These are broken into five categories: basses, keys, leads, pads and sound effects.

A toolkit of cinematic sounds

The core sounds of this library are six synthetic strings and choirs instruments. These sounds are useful even before processing. Ethereal choirs and lush string pads can be made instantly. However, the three-layer structure of Mirage allows you to take these sounds even further. Complimentary sounds can be layered together and modulated with LFOs and filters, and reverbs can be applied. Using these features, it is easy to create rich textures and soundscapes with movement. But this is by no means the extent of Phoenix's capabilities.

Keys and bass sounds can also be produced. In the included presets you will find many examples of these types of sounds such as low rumbles, plucky staccatos and clean subs. Phoenix also works excellently when layered with real instruments. The smoothness of the sounds of this product gel superbly with them, enhancing their richness and width.

You might make use of Phoenix in a film/TV/video game score. A preset such as Shimmering Cavern could be used to create a sense of wonder and beauty. This preset uses three sound layers spread across three octaves. LFOs subtly modulate the volumes of these layers, and a touch of bit-crush distortion is used, resulting in a sound that shimmers in the high frequencies. Similarly to this, there are many other presets included in this product that have an emotional character. This track could be added to by using the Bass Pluck preset with a low pass filter applied to it. This would work excellently as a driving 'underscore' element.

Another possible use for Phoenix might be in an ambient track. A preset like Smoothest Pad might be used to play wide-spanning chords, gently transitioning into each other in the background. A Keys preset like Melody Drops could be used on top of this for a distant emotive sounding melody. A Bass preset such as Sub Bass Repeater could be used to fill out the low end, and give drive to the track with its pulsing pattern.

A third possibility might be in a track outside of the ambient or cinematic genres. Phoenix can be used to add character to your electronic/rock/hip hop track. It can be used as something to bring depth to the background or to layer up with your real performances. The various strings presets of Phoenix, in particular, might be useful in these situations. These synthetic strings have a smooth organic sound to them, similar to their real counterparts, but with a softer character. Phoenix might also be useful in writing a breakdown in a track – add atmosphere and a sense of open space – before bringing back the drive of your track.