Login / Register
My KVR0Updates
00 items | $0.00 CHECKOUT New
Plug-in Developer?
Search
Who are we in the KVR community in 2020?VOTE NOW
PitchCraft EZby

PitchCraft EZ by BIAS is a Virtual Effect Audio Plugin. It functions as a VST Plugin, an Audio Units Plugin and an RTAS Plugin. 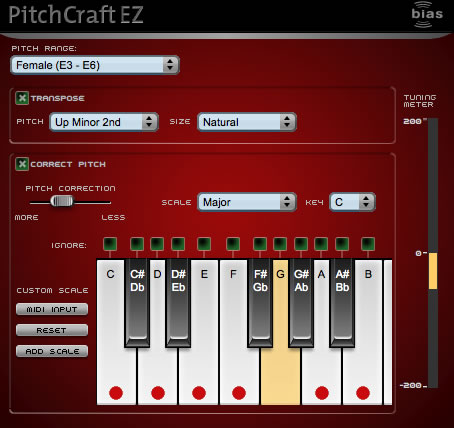 PitchCraft EZ corrects pitch problems in vocal or instrumental recordings. Its high-quality algorithm corrects pitch, while formant correction retains the voice's natural sound. PitchCraft EZ can also be used for creating special effects, such as those used by many of today's most popular artists (i.e. "Auto-Tune"), as well as voice disguise, changing an adult's voice into a child's voice, "gender transformation" and a wealth of other creative possibilities.

Zero-G Inspiring Guitars for Kontakt 70% Off