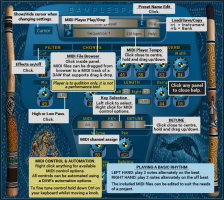 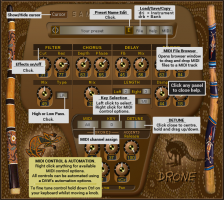 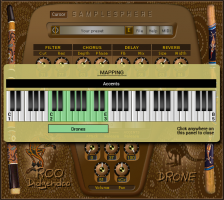 ROO Didgeridoo by Samplesphere is a Virtual Instrument Audio Plugin for Windows. It functions as a VST Plugin.
Product
Version
3.0.0.0
System Requirements
ROO Didgeridoo is 32-bit VST only.
Tags
Tags:DidgeridooAboriginalAustraliaAustralianDroneEthnicEthnic InstrumentsROO DidgeridooSamplesphereWindWorld Instruments
Instrument
Formats
Copy Protection
None
My KVR - Groups, Versions, & More
7 KVR members have added ROO Didgeridoo to 10 My KVR groups 16 times.
Not In Your MY KVR Groups
(or group limitation prevents versioning)
4 0 I Own This
3 0 Favorites
2 0 I Want This
1 0 My Actual Studio
+6 in private groups

Although no longer available for purchase, ROO Didgeridoo is bundled with the New Samplesphere Didgeridoo instrument.

ROO Didgeridoo was developed from actual didgeridoo performances and consists of 2 separate instruments, Rhythmic and Drone:

ROO Drone is loop based with all drones looping until release.

Please leave any comments about your experience of using ROO Didgeridoo in the Discussion area below by clicking "Join the discussion", or write a review.

A must have vst

I have to admit that I had doubts to buy it, because there is no demoversion at all and I was not sure if this 32-bit version will really work on my 64-bit system. It was not rated here, had no reviews, seems no one tried it before.... and it was also puzzling for me how it works at all and if it is really what I was looking for. I use Windows7 64-bit version and my DAW is Cubase Elements 7 also as 64-bit version.

But because of the very cool price I gave it a trial and just hoped that it will work. No risk, no fun :-))) In this case I fortunately had fun :-)))

To purchase it: Was quite simple. Just go to the developer's site, click on the "Buy it" button and you will get connected automatically with Pay Pal. In Euro it was around 23,00 Euro which is definitely a supercool price for this cool vst. The download starts immediately and you can save it on your pc. No serial number or registration is needed.

To install it: Was also quite simple. Just install it in the VST plugin folder of your DAW.

Open up your DAW and the plugin will be listed among your other plugins. It is listed as "Samplersphere - ROO Didgeridoo" So you have to look for it among your vst's which start with "S".

How it works and how it sounds:

Aaaaaaaaah just cool :-))) Sound is awesome and very naturally, absolutely convincing. You can use it in 2 different ways:

1. Press a key at your MIDI keyboard and each key is a different expression of the instrument like you know it from drum kits for example. This way you can easily write/compose your own Didgeridoo sequences. This is the main point here for me, because this actually allows you to make very individual Didgeridoo tracks by playing your keys like you would do with a drum kit and so there are a lot of possible variants to use this instrument. This is exactly what I was looking for and there is no other Didgeridoo VST available for a price which would be only close to this. I have found an Didgeridoo instrument for Kontakt 5, but this is more than twice as expensive as this one here by Samplesphere and I can't imagine that it will be much better. I also have found a free Didgeridoo vst, but that was a pure nightmare. I have searched the whole world wide web for a free or at least very cheap Didgeridoo VST (because I'm a poor girl ;-)), but without success, until now.

2. Select a sequence from the sequence menu: There are over 30 different loops/sequences you can simply put on a midi/instrument track per drag and drop. For example I have selected two different sequences on two different instrument tracks and was panning one hard to the left, the other hard to the right (which sounds pretty cool) and then you can put some percussions in the center for example. Pretty easy and fastly done.

In addition: You can select any key you like and any BPM you like. There are several effects like chorus, delay, reverb and a HP filter as well as LP filter (they have to be activated first by clicking on the dark blue bar above them). It seems there are also two different modes, one calls "Rhythmic" and the other calls "Drone", but I have to admit that I couldn't find out the difference between those two, because each sounds same way like the other to me. So: I couldn't find out yet how this works.

If you have got questions, just click on the red question mark at the GUI :-)))

Further good news: Although it is a 32-bit VST it runs flawless at my 64-bit version of Cubase.

I have listened the audio examples here and I had really doubts if it would actually work as well as it sounds, because everybody would buy it then would Mr.Spock say, because that would be logical, but it seems no one have tried it until now and so of course I had seriously doubts, but all my doubts are gone, because I have tried it now and I can highly recommend it!!!

This is absolutely fun!!! Super easy, great sound, a lot of ways to create very own Didgeridoo compositions, exactly what I was looking for and on top very, very cheap especially if you keep in mind what you get for this few money. If you are looking for a supercool and cheap Didgeridoo vst: Go and get it!!! Of course I give the highest possible ranking here, because I'm completely in love with my new toy and it is hard to get this constantly smile at my face off since I have it haha.

Thanks to the developer at this opportunity. Very nice from you to make it available for the poor of us haha. Great job, love it :-)))