Satyr
by Land of Cockaigne

Satyr by Land of Cockaigne is a Virtual Instrument Audio Plugin. It functions as a VST Plugin. 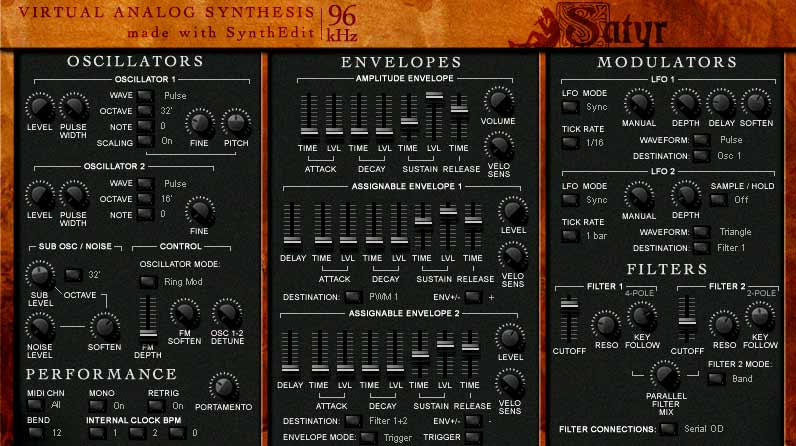 The initial reviews here really put me off this .
So here I am pleasantly suprised after all.
The UI is fairly well laid out though initially confusing but thanks to the text documentation thats easily overcome.
Very limited in the preset department which does force you to roll your sleeves up (always a good thing in my book).
I wouldn't describe the sound necessarily very analog but that is a bit of a compliment.
You get a swag of modulation options including enevelope modulation ,amplitude modulation ,ring modulation ,FM ,3 egs 2 LFo's a sub oscillator and some damn nifty internal routing.
Rock solid on my system and ridiculously CPU lite around 2-5% max on any patch.
The modulation options are what wins me over here.
Great for oddball lfo madness ,fm percussion ,wave shaping via the AM and FM functions and a bit of a personality all of it own
Overall I'd rate it around an 8 out of 10 for a freebie.
As far a Synth-Edit creations go this would be in my top 5 best.
I'm already building percussion kits for Live 4.0's impulse with this.
Great for IDM style drones ,scrapes and all sorts of other goodies.
Definately a stayer .Read more

I really want to like Satyr, but unfortunately I can't. Of many of the Synthedit creations available, Satyr has perhaps the most warmth and a tendency towards analogue-ish style sound (I'm very wary of saying VSTi's sound like true analogues because to be honest there are only a very few so far that have convinced me - it certainly can be done, but it is claimed far too often, when if you have a stand full of analogues - you can obviously hear the difference with most VSTi's).
S0.......Satyr seems to have a sweet point at the lower end of the keyboard - good for rounded basses and lower mids. Octaves 1+2 can sound very warm with Satyr. I'd almost compare it to the type of sound you can get with things like Junos - fat, warm, spongey basses - not spikey enough to do aggressive acid-ey sounds or hard-edged basses at all though. Very nice for bottom end pads too. I've never had much character out of it at the top end though - personal taste obviously, but it's far far from a workhorse synth.

Features - well, there are lots of them - lots of modulation options and a good set of envelopes etc, but some of the parameters just don't seem to make much of a change to the overall sound - it's a knob-festooned GUI, but really, half of the features could have been left off for all the use they are. It just seems overly fussy and complicated to me. And I like programming my own sounds - I don't use presets, so I know my way around synths - but somehow (and I'm not sure exactly why) Satyr just doesn't get me making decent sounds much. It's not inspirational, even though looking at it first glance, you'd think it was capable of all manner of weirdness - but it's a real fight to get unique sounds from it in reality.

GUI - initially you think "wow - lots of knobs, lots of features, therefore great to play with" but again I don't even like the GUI - it's too dark for one thing. You're endlessly peering at your screen close up to try and decipher what the legending says. And some of the parameters seem to be in the wrong place to make intuitive editing possible. It's not nasty - it just isn't user-friendly.

VFM - free, so you can't knock that part.

Sound - as mentioned before, it can have its uses. Bassy and roundedly warm. But not that flexible - I've never had a convincing mixable lead from it. Pads are good at the lower end but not the top.

As said - I want to like it. Obviously a lot of effort went into this synth. Perhaps it just needs a little modification regards CPU etc. Initially it looks like a beast but just doesn't deliver. I'd say go for it if you want mono lines - it doesn't crash for that, and there is quite a good range for those mono basslines or lower mid lines - sometimes it can almost be a bit squelchy, but then doesn't go far enough to present real character - that's probably what makes me not like it in the end, sorry.Read more

Put on your starscaped glasses and your neon coloured suit
Its time to rattle roll and funk the night away with SATYR
This beauty is the cream of the crop when it comes to simulation of crackling transistors in a old lo fi raw synth
I managed to squeeze out some of the funkiest sounds, and don't ask me how I did it because this beast is over packed with features.
Let me sum them up for you audiofreakz out here

each section comes with its own features, for the oscillators o.c. all features to control these two great oscillators.
you can widen or narrow the field you can fine detune or rough detune the sound add depth / ring modulation / FM soften
set an internal clock bpm and use pitch / portamento

for the envelopes all the settings you possibly need to make the sound you have in mind ... attack / decay / release / velocity sensibility / etcetera. first for volume / amplitude and 2 other envelope sections with the same features as the first with the difference they are freely assignable for the purpose you have in mind for them.

In the modulation section we find the filters with lfo and resonance as most important (to me ) and further on freq cut off band filters and some features I haven't mastered yet because I lack time ;)

However .. this is one of the most flexible monophonic (4 voices polyphonic) synths that is very usefull for lead synth sounds

this a wonderful synth. great for dirty analogish sounds. i reall like the mod section alot of possibilites here. the gui is out standing! probally one of the best SE guis out.

the main problem i had with this synth is the stability. it would crash pretty much every time i hit a chord or played to fast. now most of the time you can make a sound and render it to wav with a midi file controlling it BUT BUT BUT i could not even do that. when i tried to render it to wav all i would get is that grinding buffer overide sound.

if some way this problem was fixed this synth would be amazing but for right now this synth is unusable for me.Read more

So this is a wonderfull sounding synth if it will ever work.I found some really warm and wierd sounds.
And I think it´s GUI is nice to look at and easy to handle, but a little bit to big and "screen consuming". A posibility to adjust the size like in Synth1 would be good.

I have the experience that it crashes, what ever I do, after a while what ever I do and no sound comes out anymore.
I´m using it with cubase 5.1

So, if I could a stable version I surely will use it in some songs.Read more

Average user rating of 3.50 from 6 reviews

BSOD Problem with TPKD.sys from an old version from iLok Pace (my bad)by c_voltage @ 0:18 in Effects

What synth do you actually USE the most in your own music????by WatchTheGuitar @ 23:57 in Instruments