Sonicircuit Stereo Flanger by Syntheway Virtual Musical Instruments is a Virtual Effect Audio Plugin. It functions as a VST Plugin, an Audio Units Plugin and a VST 3 Plugin. 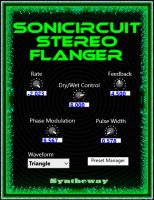 Sonicircuit Stereo Flanger is an effect plugin that creates a mixing of two identical signals together, one signal delayed by a small and gradually changing period, causing a 'phase shift' between the two signals. The length of this pause is gradually varied over time resulting in a 'sweeping' effect, delivering from subtle nuances to extreme jet engine taking off.

Primarily intended for use with guitar, vocals and synths, this virtual effects unit is versatile and intuitive to create new and unique textures.

Adds subtle to dramatic filtering effects and resonances to the sound, processing random "shifts" and "sweeps" in the frequency spectrum of original signal thus creating a sweeping, whooshing filter effect with a metallic, ringing sound: