Spectron by iZotope is a Virtual Effect Audio Plugin. It functions as a VST Plugin, an Audio Units Plugin, a DirectX Plugin and an RTAS Plugin. 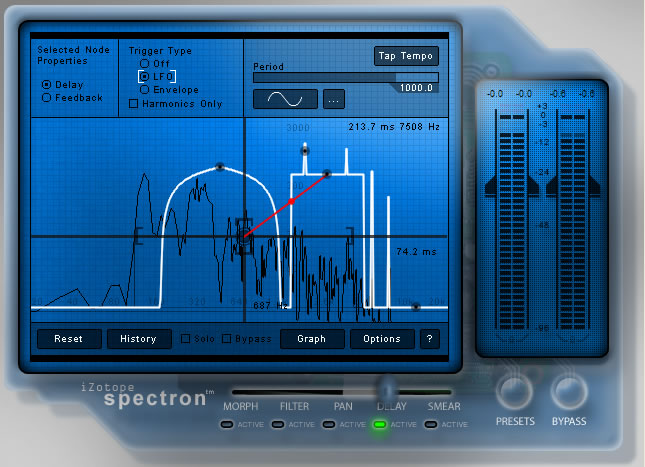 I tried Spectron when I first got into computer based music 6 or 7 years ago, at the time Spectron hadn't been out that long and because I was new to production with a DAW I focused mainly on the presets, but even at this early stage I could tell, that Spectron was unique.

It's been a while and Specton has been on my wish list for sometime as a luxury item that when I could afford it, I would pick it up.

I really wish I had picked it up sooner, as now I have got deeper into it's controls and capacity, I can see where It would have fit previous productions.

It's so good with a 50% mix, on everything from drums, vocals, synth pads to found sound sampling.

As a spectral effects processor, their is nothing to touch it, both in control and quality, thre gui can throw you to begin with, looking like a complicated mix of options, but when you get in to it, you will see how mucking with those controls, is to be encouraged as your not mixing with it, you using it to get strange an interesting effects.

Some people may have overlooked it's delay compensation capacity, as Izotope freely admit, that because the engine is heavey with different versions of delay and filter it can great huge latency's, I did find this an issue and it's something that may have put me off when trialing the demo, however I've found techniques to get latency right in my DAW (Ableton) which mean even the complex sounds stay in time with the source material, and as I wrote earlier, Spectron is a sound design tools, not a live effect processor, and frankly I like the notion towards that useage.

It's a great package, a little older now, but I still can't find anything like it anywhere else on the market, it's a device that would embrase an update as it still sounds fresh, when I put it on slected source material in my set's.

I give it 9/10 instead of a 10/10 simply because the gui isn't as clear or fresh as it could be, and an area of performace control would be nice to link sliders together and improve quick control.

Slick EQ GE Models: American, British, German, Soviet and Japanese - What are They Based On?by Calenberger @ 11:59 in EffectsStudio One 5 Available Nowby tremolounge @ 11:56 in Hosts & Applications (Sequencers, DAWs, Audio Editors, etc.)Best Delay Plugin?by AcrossTheSky @ 11:53 in Getting Started (AKA What is the best...?)