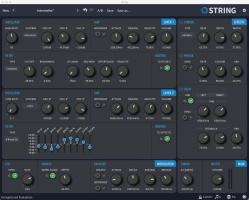 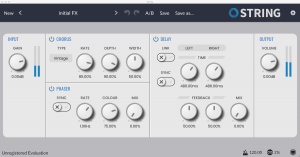 String by Loomer is a Virtual Instrument and a Virtual Effect Audio Plugin for macOS, Windows and Linux. It functions as a VST Plugin, an Audio Units Plugin, a VST 3 Plugin and an AAX Plugin.
Product
Version
1.16.0
Product
Version
1.17.0
Product
Version
1.16.0
Tags
Tags:String SynthLoomerStringSynth (Analogue / Subtractive)Universal 2 Binary
Instrument
Formats
Effect
Formats
Copy Protection
Serial Number
My KVR - Groups, Versions, & More
38 KVR members have added String to 9 My KVR groups 47 times.
Not In Your MY KVR Groups
(or group limitation prevents versioning)
16 0 I Own This
14 0 Favorites
10 0 I Want This
2 0 My Actual Studio
+5 in private groups

String is a virtual instrument that emulates the beautiful sound of the polyphonic string synthesizer. String's authentic tone comes from its accurate emulation of the divide-down oscillator technology behind the lush ensemble synths of the '70s.

String has two individual sound generating Layers, each housing three phase-locked oscillator stops at 16', 8' and 4' ranges for Layer 1, and 8', 4', and 2' ranges for Layer 2. The relative volumes of each stop can be finely tuned to produce an enormous range of timbres. Both Layers have controllable note split points. Layers can be placed so that each is controlled by a specific range on the keyboard, or even overlapped and stacked together.

Each Layer has its own Voicing Mode from a choice of Monophonic with Last, Low, and High Note Priorities, Paraphonic, and Polyphonic. In Polyphonic mode each voice has its own Attack/Release amplitude modulation envelope. In Paraphonic mode all voices within a Layer share a single monophonic Attack/Release amplitude envelope. The Monophonic Modes produce a single voice, which can be either the Lowest, Highest, or Last note pressed.

Layers can be further shaped using the monophonic Filter section. This section has several Filter types; a Highpass / Lowpass pair of filters in series, an analogue resonant filter in either Lowpass, Bandpass, or Highpass modes with various modulation options (including Channel Aftertouch), and a 9-Band EQ. The Filter section can also be switched off altogether.

Both Layers can be individually routed into the Effects section. Layer 1 can also optionally be routed directly into Layer 2's Filter to produce serial Filter tones.

String's Chorus section is modeled on the bucket-brigade device that characterized the sound of the classic ensemble synths. Select from two different Chorus algorithms for either an authentic Ensemble timbre (Type 1), or a more modern, denser sound. (Type 2). A built-in stereo Phaser can be used to add movement, depth, and interest to String timbres. The Effects section is rounded off with two mono bucket-brigade device delay units with independent time and feedback settings, which can be tempo synced, and linked together into a single stereo delay.

All controls can be easily mapped to a hardware controller using the simplified MIDI Learn feature.

String hasn't had an update in almost three years! Is the dev even active anymore?

Yes, still around. Next update for String is currently underway and will add a new scalable UI.