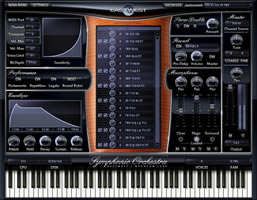 Symphonic Orchestra Gold by EastWest is a Virtual Instrument Audio Plugin and a Standalone Application for macOS and Windows. It includes, and is therefore "powered by", Play, which functions as a VST Plugin, an Audio Units Plugin, a VST 3 Plugin, an AAX Plugin and a Standalone Application.
The OS and Format icons below are for the latest version of Play. The version numbers are for Symphonic Orchestra Gold.
Product
Version
1.0.5
Product
Version
1.0.5
Tags
Tags:Strings / OrchestralBrassDrum KitsDrumsEastWestFluteLoopsMPEOrganPercussionPiano / KeysSymphonic Orchestra GoldWorld
Instrument
Formats
Copy Protection
Dongle (PACE iLok Smart Key)
My KVR - Groups, Versions, & More
4 KVR members have added Symphonic Orchestra Gold to 4 My KVR groups 5 times.
Not In Your MY KVR Groups
(or group limitation prevents versioning)
2 0 I Own This
1 0 My Actual Studio
1 0 Favorites
+1 in private groups

To achieve the feel of a live concert hall performance, each instrument and section was recorded with three mic positions, close, stage (conductor's position) and hall. By selecting different mic positions, users can mix these sounds together to create any kind of natural ambience their project requires. This eliminates the need for artificial reverb.