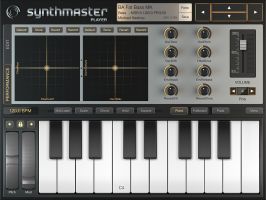 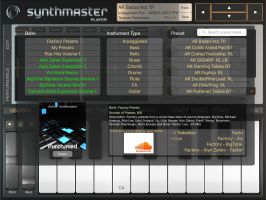 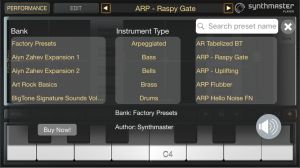 SynthMaster Player for iOS is the mobile player version of SynthMaster for iPad and iPhone devices. It is targeted towards users who prefer to use presets rather than designing their own sounds during music production.

Although it is a preset based player, users can edit the following parameters:

The free app comes with 100 factory presets. When users complete registration by entering their names and email addresses they receive another 100 factory presets as a bonus. After completing registration, users can upgrade to the Pro version of the app by purchasing the "Factory Presets" bank via In-App-Purchase (IAP) for $4.99. With the Pro Upgrade all of the 800 factory presets are loaded and also the following features are unlocked:

The built-in 2 octave keyboard with pitch and modulation wheels lets users play notes without having to connect an external MIDI controller to their iPad. With its Scale functionality, it shows the users the notes on the scale, and with its Chord functionality the user can play a certain chord by pressing a single note.

SynthMaster Player for iPad acts as an source/instrument in InterApp Audio. We demonstrate in our user manual how to connect it to InterApp enabled DAW apps.

SynthMaster Player for iPad acts as a source/instrument in AudioBus, with state saving enabled. We demonstrate in our user manual how to connect it to AudioBus enabled DAW apps.

I could give five stars --- but, in the iOS version, I cannot get SM to sync to MIDI clock. I know I'm sending MIDI clock to my interface - I've tried a couple - but cannot get them to sync and percolate together. What am I missing?

Its great (when you get it working) I"m Having troubles re-installing it!! Ableton kind find it, in its designated folder by synth master and showing errors so redownloading. When I did have this VST running I remember it being great and huge selection of sounds. Were Sylenth1 fans, but when this came along its a mean rival to it. - Possibly better. I dunno we just package just the 1up from standard.around $129.

bona use this in future productions, they are 2 professional products.