TCS-68 Cassette Tape Channel by Fuse Audio Labs is a Virtual Effect Audio Plugin for macOS and Windows. It functions as a VST Plugin, an Audio Units Plugin, a VST 3 Plugin and an AAX Plugin. 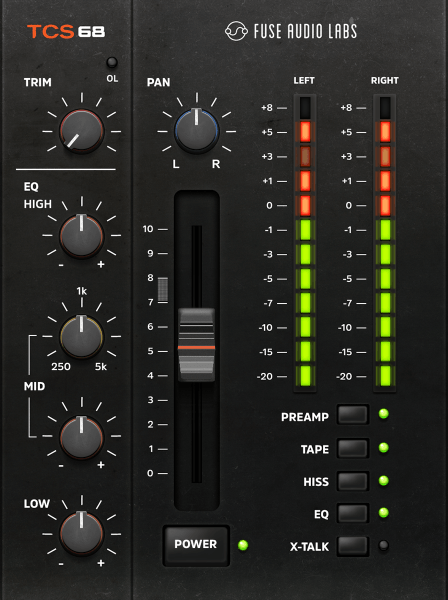 The TCS-68 was made to pay homage to one of the most iconic cassette tape based 8-track recorders introduced in 1990, a little while before digital multitrack recording solutions forced their way through into the consumer market.

The original unit comprised a powerful 10-channel mixer that included a simple 3-band EQ, mic and line inputs as well as insert loops for each channel, an 8-track recorder with an advanced noise reduction system and a clearly arranged meter bridge. Given that it used compact cassettes as a recording medium it's obvious that it was far from high fidelity sounding and thus aimed at semi-professional users and smaller studios.

The goal when creating the TCS-68 was to revive that vibe in the box and to do justice to the original sound. The preamp, the tape system and the EQ have been faithfully recreated.

Available in VST, VST3, AAX Native, AudioUnits for Mac OS and Windows in 32 and 64-bits.