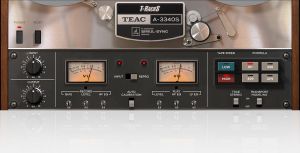 The TEAC 3340S 4-channel Simul-Sync tape deck was part of the second generation of their Creator series. With Permalux heads for excellent frequency response, low distortion and resistance to wear, the 3340S was the most versatile quadraphonic tape deck at the time.

Until then, conventional 4-track recorders didn't permit overdubbing in sync. And that's where Simul-Sync technology from TEAC admirably comes to help. Turning recording, bouncing and overdubbing into an art form, this officially certified TEAC A-3340S will offer you the same channels of creativity that inspired so many great songs.

And so the TEAC A-6100 MKII was born. Indestructible and without compromise on any components, it was a huge success. In fact, the A-6100 with its admirable sound and Simul-Sync technology was the core unit that evolved into the famous 80-8 multi-track. And now this officially certified digital version is here to add its unique sonic textures to your music.

The T-RackS TEAC A-3340S puts all the controls from the original at your disposal, along with some additional features to help you create just the sound you're looking for. You can calibrate the record and playback heads, or choose from 2 tape speeds and 4 tape formulas for a wide variety of tape-machine effects. We've also included a number of presets and you can easily save your own.

To Each it's Own Sound

The TEAC A-3340S is the 4-track tape recorder behind some of the most famous demos and songs in history. For example, The Doobie Brothers used a A-3340S to record several of the song demos that earned them a record deal, while Brian Eno and others still use the A-3340S today for its sonic qualities.

Analog tape audio recorders are complex systems. They impart magic to the audio material, lifting the art within to a higher level. They add musicality to music.

What a tape machine adds to audio is the result of a number of interactions amongst several interdependent factors. More than just saturation, compression, or EQ alone, these factors work together, one affecting each other with the dynamics of music, adding a "movement" that goes into the soul of what we perceive.

Decades of music produced on these pieces of artful human engineering have tailored the way we think music should sound. It's imprinted in our DNA.

From TASCAM DNA to IK DSP

For the T-RackS TASCAM Tape collection, each machine was chosen specifically by TASCAM and TEAC themselves, recommending particularly sought-after models from their history and helping IK source the best-sounding units. Each machine then went through a complete restoration to bring them perfectly back "to spec" before the scientific modelling process started.

IK's DSP engineering team then took each stage apart, analyzed them in-depth, and produced a model of the entire magnetic tape-recording process. This model works in symbiosis with a powerful dynamic convolution engine to capture the essence of the real machines, faithfully bringing the complete picture of these complex analog engineering marvels to the digital realm.

The program coming out of these units is very similar to the one coming in, just better. It's subtle, but the impact is anything but.

And the T-RackS TASCAM Tape collection faithfully brings all this magic right to your DAW.

Choose from 4 different tape formulations, each with its own unique tone:

All TASCAM Tape Collection plug-ins share the same set of controls to enhance the ease of use and allow for quick A-B comparisons among them. Key features include:

The Power of T-RackS

Like all T-RackS plug-ins, the TASCAM Tape Collection offers you two ways to work: as a stand-alone plug-in, or inside the T-RackS 5 shell. Use these together with any of the other 39 T-RackS processors to mix and master faster than ever creating a powerful, lightning-fast workflow.

The T-RackS shell offers a unique modular system with up to 16-processor chains, series & parallel routing, easy A/B/C/D comparison, up to 192 kHz / 32-bit floating point processing and much more, in both a plug-in and stand-alone mastering application.

I own it. It adds a perfect amount of low end and "roundness" to the mix and polishes it up. It really does a nice job of giving you an analog feel and color. Great on master and for all instruments but especially good for bass, guitar and vocals as well.